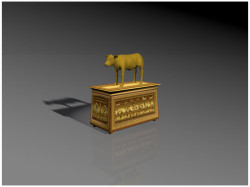 When Moses went up to the mountain to receive the Tables of the Law, he was there during forty days.1 Meanwhile, Israelites started to get impatient and asked Aaron, the brother of Moses, to make gods to lead them hence forward.2 The members of the crowd non-Israelite, who came out of Egypt with them3, surely influenced a lot in this request. They were used to worship idols and images. Not in vain, among the objects considered by Egyptians as symbols of deity there was the ox or calf; that is why they made a gold calf and they worshipped it. The people wanted an image which represented God, and which occupies to them the place of Moses. Aaron was weak and he gave way to them and he made the idol with the gold provided by the people. When he finished producing it, he presented it saying: “These are thy gods, O Israel, which brought thee up out of the land of Egypt”.4 Then, he constructed an altar in front of the calf and proclaimed holiday to Jehovah for the next day.5 The holiday resulted in orgy and opened idolatry. God told Moses to descend and see what was happening on the Israelite camp. “When Moses approached the camp and saw the calf and the dancing, his anger burned and he threw the tablets out of his hands, breaking them to pieces at the foot of the mountain.  And he took the calf the people had made and burned it in the fire; then he ground it to powder, scattered it on the water and made the Israelites drink it”.6

God had not revealed any similarity of him and had prohibited any material representation.7 The extraordinary miracles carried out in Egypt and in the Red Sea aimed to establish the faith in Jehovah as the invisible and omnipotent Helper of Israel, as the only true God.8 And the wish of any visible sign of his presence had been met with the pillar of clouds and fire that had guided the people, and with the revelation of his glory on the Mount Sinai. But being the cloud of the divine presence still in front of them, they turn their hearts back to the idolatry of Egypt and represented the glory of the invisible God through “an image of a bull”. Aaron tried to make Moses think that a miracle had taken place, that the gold had been thrown to the fire and that, through a supernatural force it had turned into a calf.9 But his excuses and subterfuges were useless. He was treated as the main offending. The tribe of Levi had not taken part of the idolatrous worship and it was up to them to apply a punishment. Three thousand of those who persisted in idolatry died, being forgiven those who repented.10