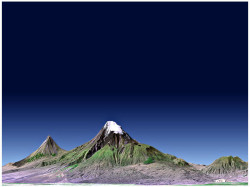 After five months being in the ark Noah, his family and the animals, the waters started to go out. They had reached more than 7 meters over the highest mountains which were then. High mountains and deep valleys were formed then with the movement of the earth’s crust. In some way, the Lord must guide the ark until a safe place between high mountains, probably with calm waters, a protected place where the ark finally rested: the mountains of Ararat.1 There are several places that are called Ararat nowadays. A people, a city, a province and a mountain range with two big volcanic mountains that were similar, called “Koh-i-nuha” by the Persians, which means “the mountain of Noah”. All of this can be found between the current Armenia and Turkey, very close to Iran. In the Bible, Ararat was also a country, the ancient kingdom of Ararat2 (in Assyrian, Urartu)

The waters dropped gradually during two months and a half, after the ark rested upon the mountains of Ararat. God had looked after them on the middle of the storm and the only rough ocean, which had turned out to be the surface of the earth. It was a serious test; but Noah’s faith did not waver, for he had the certainty that the divine hand took the helm. Noah and his family waited without doubt eagerly until the waters dropped; for they would yearn for setting foot on land again. When, according to the order of God, they went at last out of the ark3, Noah did not forget about Him who had looked after them. His first act after having gone out of the ark was to build an altar and to offer a sacrifice of every kind of beast and clean bird. With this offering, declared his gratitude to God for their liberation, and his faith in Messiah, the great sacrifice. The Lord liked this offering and this resulted in a blessing, not only for the patriarch and his family, but also for all of them that would live on the earth.4 There was on this a lesson for future generations. Noah had come back to a desolated land; but before than even preparing a house for him, he built an altar for God. His cattle were small, and it had been preserved with great effort. However, he happily gave a part to the Lord, admitting everything was His.