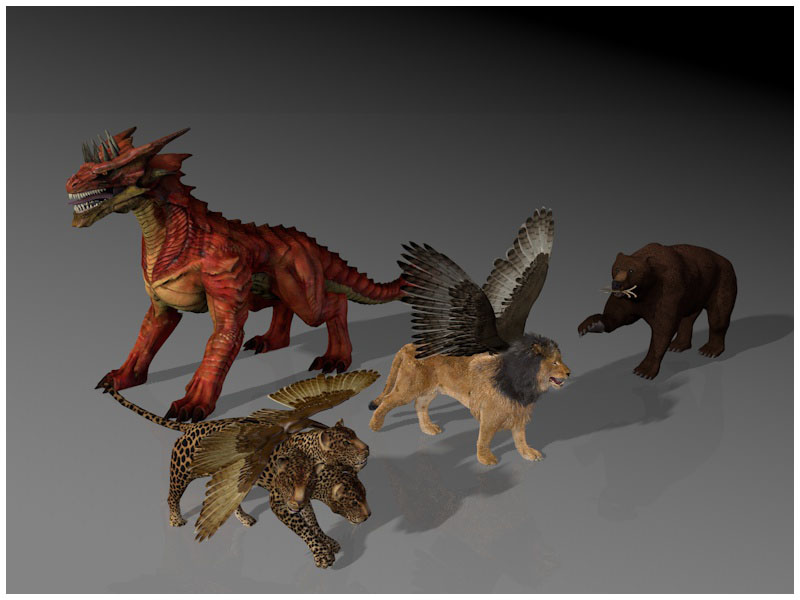 It was in the first year of Belshazzar’s Kingdom, the last king of Babylon, when Daniel received a dream from God, a prophecy which was very similar to the dream of the statue of the future that had Nebuchadnezzar.1 In the dream Daniel saw four huge and unique beasts coming out of the waters of a rough sea. The first beast seemed a lion but had eagle’s wings. It came then the second which was like a bear and had three ribs between the teeth. The third one looked like a leopard with four wings of a bird and four heads. Finally, he saw in the dream the last beast. It was dreadful, extremely strong and indescribable. It had huge iron teeth and shattered everything. Then he saw details of this beast, very different from the others. On his head it was ten horns, but Daniel saw a new smaller horn arose among the ten. Growing it dropped three of the ten and acquired human appearance, because he had eyes and mouth which allowed it to speak.2 In addition to that shocking fact, Daniel’s attention was taken to something that was happening at the same time in heaven. He saw thrones to be placed as if a special event was about to happen. Then he saw it was a trial, because an imposing Elder, the judge, sat on his fire throne, surrounded by a huge crowd and the books were oppened.3

Daniel was still impressed by the powerful voice and the insolent words of the little horn.4 Finally, he saw coming through the clouds of heaven one like the son of man, who approached the elder and was asked to get closer him. He was given dominion, glory and a kingdom so all people, nations, and languages serve him. His dominion will be eternal and will never be destroyed.5 A celestial being of those who were there explained to Daniel the prophecy.6 This beasts represented the different empires which will be in the world from since that moment.7Babylon, represented by the winged lion, was followed by Medo-Persia, Persia, and Greece, the fast Leopard with four heads. Rome was the dreadful beast with iron teeth. Like the ten toes of the statue, the ten horns of the beast represented the empires that followed Rome.8 A rock which represented the Second Coming of Jesus to earth destroyed the statue of the future and will form on earth a new eternal kingdom. With a strong parallelism, at the end of this prophecy, the judgment of the Judge in that heavenly trial celebrated with help of the Son of Man will dictate the end of this world and its successive kingdoms. Then, ‘When the time comes’ the saints of the Most High will receive the eternal kingdom in the second coming of Jesus.9

In addition to this celestial trial, before the end of the world, the other main contribution in this prophecy which disturbed Daniel so much was the new figure of the little horn, a very special power not mentioned in the first prophecy. The celestial being explained to Daniel that this power would not be only political, knocking other kings and becoming greater than all others, but also different to all and would successfully go after the saints of God for a long time10, speaking blasphemies against the Most High, because it intended to be a religious power having the idea of changing times and law.11 This disturbed very much the prophet Daniel, who was very worried about it.12 Two years later, he received a vision that he would respond in part to its worries.13