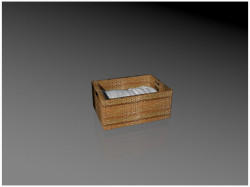 A new Pharaoh who had not known the good leader Joshua, son of Jacob, nor he did not want to admit his great achievements and beneficial contributions for Egypt, dominated the country.1 Jealous and frightened of the number and power of the Hebrews who lived in his nation, he did everything possible to submit them, even degrading them to the point of slavery to guarantee the control.2 Other method, more evil and inhuman, was to order to kill all the newborn Hebrew boys, assigned to the Hebrew midwifes who, for reasons of conscience and for fear of God, did not carry out the order, claiming robustness of the Hebrews who did not need practically the midwifes.3 Finally, at the height of his evilness, the Pharaoh decreed that anybody who see a newborn Hebrew boy, must throw him to the river.4 In those difficult circumstances a boy from the tribe of Levi was born, whose parents hided him for three months.5

The parents were desperate, and they were not able to hide it for any longer, so they took the decision of leaving him on the river, but in a basket, ark of rushes, which was prepared conveniently with pitch so that he could float on the water.  They left him protected among the rushes of the bank and he was watched in the distance for a sister of the boy, maybe hoping that some Egyptian finds him and takes pity on him, as it really happened, for none other than the daughter of the Pharaoh found him when she was going to bathe in the river; she was surely guided by God to that place.6 Things do not happen by chance and God was attentive to what was happening there. Those parents trusted in God and hoped his intervention in some miraculous way. The princess took pity on the Hebrew boy who cried. The sister of the boy, who was hidden, turned up like appearing by chance and with much cunning, she offered her to go looking for a Hebrew nursemaid to look after the boy and bring him up for the princess. She accepted immediately; she even offered to pay the nursemaid for her services. Of course, she looked for her own mother, who could bring up and freely educate the boy until he was old enough. The boy was called Moses by the princess. She adopted him as if he was her own son, living since then in the palace and destined for succeeding the Pharaoh.7

God answers the prayers of those who talk to Him with faith and confidence.8 Sons are God’s inheritance9 and it is our responsibility and privilege to bring them up in the way of God.10 As we can see in the story of Moses, he received a good education. He never forgot his brothers of race, nor God’s teachings nor the good values his mother instill him. He was so prepared for the great work that God had in store for him.