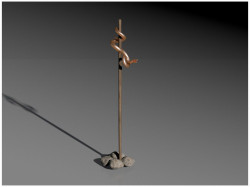 Israelites were a travelling nation of free slaves who followed God and his leader Moses through the desert, on their way to the land of Canaan. Even though God always provided all the needs of the people, sometimes He also tested their faith, allowing the provisions reached a critical minimum level, or forcing them to face intimidating obstacles. Sadly, Israelites often failed the tests and they did their best to complain bitterly against God and his leaders. In response, the Lord “sent fiery serpents among the people, and they bit the people; and much people of Israel died”.1 Israelites understood the message. Then they cried out for Moses and they beg him to talk to God to save them. In his love and mercy for those errant sons, God ordered Moses to make a bronze snake and to place it in a flagpole. Everyone bitten by a snake could look with faith to that symbol of sin, and so be healed. However, those who refused the divine means of salvation would be condemned to death.

The bronze snake itself did not have any healing properties. The snake was another objective lesson, as well as the Sanctuary’s services, the burned offerings, the sacrifices and holy days, through which God revealed the simplicity and beauty of his plan of salvation. The literal snakes had bitten people and had caused their death, by the same token, Satan, the original snake, had deceived the first parents of mankind, passing on the deadly poison of sin. Instead of leaving us at the mercy of our chosen sin, Christ became a snake in a flagpole.2 He became sin for us. He changed our poisoned nature for his pure and holy character. He accepted a slow, painful and inevitable death that belonged to us, so that we could enjoy his abundant life. Israelites just had to look with faith to our Savoir and accept the healthiness and salvation He offers. That is what we also have to.

Nevertheless, as the time passed, Israelites lost sight of that beautiful illustration of God’s love and salvation. Some of them started to see in that snake a talisman of good luck, a prediction of good fortune and they burned incense for it.3 They called it Nehuhstan. They started to attribute their healthiness, blessings and prosperity not to God, but to the snake. They started to honor and trust in the symbol rather than in the Savoir that it symbolized. As before they had burned smelling incense in God’s Temple to represent the prayers and gratitude’s offered to him, they now burned incense for the snake. The good king Hezekiah, who “did what was right in the eyes of the Lord”4, he did significant alterations, destroying high places and sacred stones, cutting down the groves. He also ordered the Levites to purify God’s Temple, removing all kind of impurity placed in the house of God to adore the idols. Among the destroyed objects, there was this historical relic. King Hezekiah knew he had to destroy that idolatry, that rival in people’s heart if he wanted them to come back to the true God, and so he did.