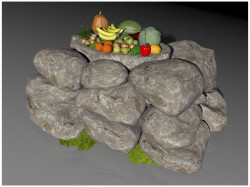 Immediately after Adam and Eve sinned, God showed his love for the human race. As the wages of sin is death1, God taught the first human couple that the sacrifice of a lamb2 was the only foreseen medium for redemption.3 This offering involved recognizing the need of a Redeemer and showing faith in God and his redemption plan.4 Contrary to Abel, Cain harbored feelings of anger and rebellion. Both brothers knew everything concerning the preparations made for the redemption of the human race and the system of sacrifices, which symbolized and reminded of the plan. Although Cain was aware of God’s redemption plan he chose to be rebellious and disobedient5, behaving contrary to God’s will6, and therefore he presented an offering without showing faith.7 He was not willing to observe the plan obediently by finding a lamb to sacrifice together with the earth´s fruits. He only took the fruits and ignored God’s requirements. Because of this, God did not accept his offering. Cain saw no sign of approval. In his offering he did not express any repentance from sin. He preferred to depend on himself and came up confident in his own merits.

But God, in his mercy and love8, shows Cain the right path again, the one he was supposed to follow.9 Sadly, Cain, moved by envy and pride, decides to murder his own brother.10 In spite of this, God does not punish him for his action, rather does he protect him and offers him time to repent.11 Nevertheless does Cain despise God’s redemption plan, altogether with his love and mercy, and chooses to live far away from the Lord’s presence.12 Cain and Abel represent two types of persons: the righteous and the wicked, the believer and the unbeliever, who exist since the entrance of sin until the second coming of Christ. Cain, who murdered his brother Abel out of envy and hate, represents the wicked, who would envy the righteous and hate them, for they would be better than them. They would feel jealous towards the righteous and persecute and murder them, because their good works would condemn their sinful behavior. The whole Bible presents the fact that only through Jesus’ merits our sins can be forgiven. Those who believe they do not need the blood of Christ and can therefore gain God’s favor through their good works only, without mediation of divine mercy, are committing Cain’s same mistake. Unless they embrace the purging blood, they will be under condemnation. There is no other way through which they could be freed from sin.13