CHRONOLOGY OF THE PATRIARCHS 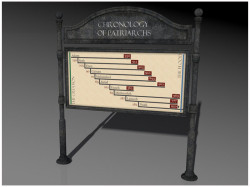 The Hebrew term “toledot” is ordinarily translated as “generations” or “descendants”, and refers to the genealogical tables of the Scriptures, very common in the Old Testament. They are considered valuable reference documents that, in addition to go back only to earlier eras, they also refer to a relation that God established with man, and which is related with the very creation of man. Therefore, and generally speaking, we could say these biblical texts establish chronological calculations which go back to ancient times, some of them even to the very foundation of the world.1 The value of these documents is incalculable, for they are the only reference of historical dating which lead us to the moment when the world was designed by God. The Masoretic Text is the most reliable of all the ancient documents which translate and develop the Pentateuch. This document is the Hebrew version of the Bible, usually used by the Jewish, and it was spread by Masoretes, scribes whose responsibility was to develop reliable copies of the Torah.

There was ten antediluvian patriarchs, from Adam to Noah. Maybe remembering them, ancient Chinese traditions talk about the first ten kings of the history of this world. The chronological calculation establish that, from Adam to the Flood, a thousand six hundred and fifty six years went by, so this cataclysm took place the same year that the longevous Methuselah died with 969 years.2 Methuselah, son of Enoch3, lived together during 243 years with Adam and other 600 years with his grandson Noah, who narrowly did not know Adam. So, we have to consider the “toledot” of the Genesis as a splendid legacy which is provided through the Scriptures. The Jewish were able to know their ancestors and go back in time until they are set in the past. The lists of the descendants are very valuable related to the transfer of promises and divine blessings, especially because they invoked God’s name.4