CROSSING OF THE RED SEA 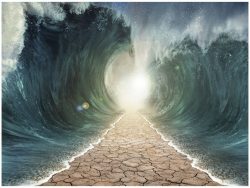 After the ten plagues of Egypt, the Pharaoh let the Israelites go at last. When they had been out of Egypt for some time, the new that the sons of Israel, instead of stopping to worship in the desert, went to the Red Sea spread in Egypt. They regretted then having chosen let Israel go, for they had lost lots of labor.1 The Pharaoh, furious, joined forces and leaded a great pursuer army. The Hebrews had camped next to the sea, whose waters had an apparently impassable barrier in front of them, when they sighted in the distance what looked like an army. Terror seized the heart of the Israelites. Some of them cried out to the Lord, but most of them hurried to complain to Moses.2 Moses followed the divine direction and did not fear the consequences. His calm and reassured answer to the people was: “Do not be afraid. Stand firm and you will see the deliverance the Lord will bring you today. The Egyptians you see today you will never see again. Jehovah will fight for you; you need only to be still”.3

The pillar of cloud interposed as a wall of darkness between pursued and pursuers. Egyptians could not locate Hebrews’ camp and were forced to stop. The wall of cloud became a great light for the Hebrews.4 God said: “Raise your staff and stretch out your hand over the sea to divide the water so that the Israelites can go through the sea on dry ground”.5 When Moses stretched out his staff, the waters divided, and Israel walked on the middle of the sea, on dry ground, while the waters kept as walls on the sides.6 Egyptians entered after them halfway the sea, and then, God took off and damaged the wheels of their carts. They wanted to run away then, but from the other shore, Moses stretched out his hand again and the sea came back with all its force against them, and all of them died.7 God showed again his protector power, he had set them free and they raised their grateful hearts fervently. Their emotions were expressed in songs of praise. Moses leaded the people in a triumphant thanksgiving hymn, the most ancient one, and one of the most sublime the man knows.8 That sing and the great liberation it commemorate made an indelible impression in Hebrew people’s memory. That sing does not only belong to Jewish people. It indicates the future destruction of all eh enemies of the justice and points out the final victory of God’s Israel. John saw the crowd dressed in white, “those who had been victorious”, who sang the song of Moses the servant of God and the song of the Lamb”.9