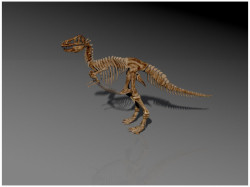 During the fifth day in the creation week, God created the fowl, the fishes, and other sea creatures, such as “great whales”1, and on the sixth day, he created all terrestrial animals: beasts, snakes and other animals.2 Each group was created with great diversity, but already clearly differentiated between them according to their genus and species.3 They had to multiply and fill the earth, the seas, and the air.4 God provided them with food5, and so did with the man, and there was neither death nor predation. It was only after the sin and the flood that drastic changes took place.6 The sin led to other changes in nature, men, and animals. Animals went through a process of “adaptation” to new their circumstances, environment, and needs, all of this anticipated by God.7 However, there never were changes in species, as they all were completely differentiated from the beginning and kept the names given by Adam. Despite the lack of changes, nature started to degrade and gradually showed signs of disease, pollution, degeneration, and death8, especially after the flood. Many species of animals and plants have disappeared ever since then.

Among the great animals created by God, in addition to the big sea monsters, the Bible mentions in the book of Job other huge terrestrial animals that were so big that they were considered untameable by man. These were extremely strong animals and were almost impossible to hunt.9 Their names are unknowns for us today10, but they had some characteristics that make us think of the great dinosaurs11, most of them had probably become extinct due to the flood, but some smaller ones could have entered the ark. In the Bible, it is called “the chief of the ways of God”.12 Some descriptions remind us of the dragons that appear in tales and legends.13 Great dinosaurs are the most spectacular fossils, but there were many smaller ones, and thousands and thousands of animal fossils similar to nowadays animals can also be found. Some of them show very little variation. God keeps nature constant, despite degradation. From the smallest insect to man, every living creature depends on his providence every day.14