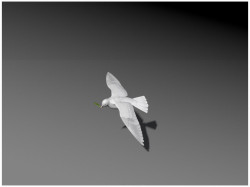 When water of the flood stopped, after months with water covering the whole world, finally water gradually retired1, and the Ark rested over Ararat hills.2 The summit of the hills began to appear3 and Noah, his family and all of the animals had been almost a year in the Ark. Noah opened the only window and send a raven to check if water had retired from land.4 The raven went and returned but he found nothing but water. Seven days after, Noah tried it again, but with a dove5, which neither did find land. Noah waited for another seven days and sent again the dove, which was late, but returned in  the afternoon with a shoot of an olive tree in his beak6, so Noah understood water had retired from land. But Noah waited for another seven days and sent the dove for the third time, which no longer returned.7 Afterwards, when God ordered it, Noah and his family left the Ark.8

Perhaps since then, maybe alter, the dove became to mankind in a symbol of peace and freedom, and the shoot of the olive tree was understood as a sign of success and prosperity of renaissance of life. After the dove flew free without return, it seemed everything had reached new stability in this destroyed world.9 Afterwards and throughout Bible, the dove is sometimes used in a poetic, symbolic and illustrative way.10 For poor people, it was an animal of sacrifice or offering representing the Saviour the same as lambs.11 When Jesus was baptised, the Holy Spirit descended on him in a physical form, like a dove.12 On the other hand, the olive tree is used to represent sacred things, as God’s Word or God’s people13, and olive’s oil was equally used in sacred rites and is also a sign of the Holly Spirit.14 Finally, the Mount of Olives, was a loved place by Jesus and very special symbol for Christians.15