EZRA AND ORDERS THREE BACK 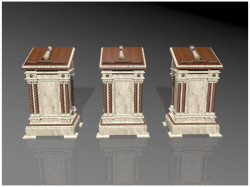 A prophecy of the Book of Daniel1, very important to the people of God, says something enigmatic about when this prophecy would start coming true: “now therefore and understand that from the going forth of the command to restore and build Jerusalem until Messiah the Prince…” […] “The street shall be built again, and the wall even in troublesome times”. When would this be? We find the answer on the very Bible. In the Book of Ezra, it is explained the process of the Israelites deported of Babylon to Jerusalem. The proclamation of three edicts of three kings was needed for their definitive return and reconstruction.

The first edict can be found when the Book of Ezra begins.2 It is defined when it is proclaimed; the first year of Cyrus, which is equivalent in our calendar to year 537 B.C. But there are some things that do not tally. The first one is that it talks about the prophecies of the prophet Jeremiah3, and those only refer to the return of the exiled. The second and more important one is the edict only refers to the reconstruction of the temple, and not of the entire city as the prophecy said.

The second edict4 is enacted for another Persian king, Darius, around the year 520 B.C. A deep study reveals that this edict it is no more than the confirmation of Cyrus’ edict5, which would make it inappropriate to be the one predicted on the Book of Daniel.

The third edict6 is enacted on the seventh year of the reign of Artaxerxes, which would be the equivalent to the year 457 B.C. In this edict, different pieces of information which would definitely fit with what is described on the prophecies can be found:

*There is a mandate of the king which aims Ezra appoints judges and magistrates.

*A public administration indicates a political restoration of the city.