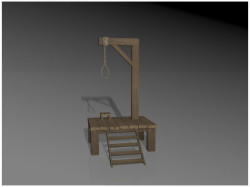 The hang is the most used execution method over centuries. It is carried out through strangulation. It is already present in Antiquity, and it is also mentioned on the Bible.1 In the book of the heroine Esther, or also called Hadassah2, it is said that Haman, an important figure, had ordered to build a gallows of more than 20 meters high in his own house3, for a person he hated. This Haman was Amalekite, from the family of Agag, and he was honored by the Persian king Ahasuerus, with a position above all his subjects. Amalekites were ancient enemies of the Jewish. Haman started to hate Mordecai because he did not kneel down or bowed to him4, “for the king had so commanded” when extolling him. Consequently, he planned to destroy, kill and exterminate Jewish, without knowing what the own queen Esther was.

Haman, with falsehood, got the permission of the king to be able to carry out a genocide against the Jewish, even a day was set for it.5 The inhabitants of Susa, the capital, were shocked because of that piece of news. Mordecai begged Queen Esther to intercede with the king to help her people. Esther prepared two banquets and she invited the king Ahasuerus and Haman. She shrewdly managed to accuse Haman for the evils of her people. The king, indignant for Haman’s behavior, was informed that he had prepared a gallows for his enemy Mordecai, and by royal order, the own Haman was finally executed on it.6