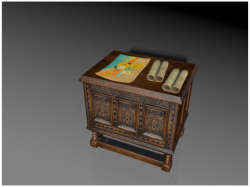 Due to the apostasy and idolatry of Solomon, the Lord, through a prophet, sent him a surprising message which said that when his son reigned, his kingdom will be divided.1 As he was left deprived of the protective care of God, many enemies of Solomon attacked him and weakened the kingdom.2 By the end of his days, Solomon admitted his sin and tried to amend the consequences of his acts. Solomon admitted grateful the power and goodness of He who is the “highest” of the high3 and with remorse, he started to retrace his steps to come back to the extolled level of purity and holiness of which he had fallen. He humbly confessed the mistake of his ways, and he raised his voice to reprimand others, in case they lost irremissibly themselves due to the bad influences he had triggered.

Solomon admitted that “the hearts of all people” are “full of evil, and there is folly in their hearts.4 The king wrote for the subsequent generations, through divine inspiration: “Having heard everything, I have reached this conclusion: Fear God and keep his commandments, because this is the whole duty of man. For God will evaluate every deed, including every secret thing, whether good or evil”.5 When Solomon died, Rehoboam, his son, reigned in his place.6 Shortly after ascended the throne, Rehoboam went to Shechem, where he hoped to receive the formal recognition of all tribes.7 Jeroboam was opposed to him. The prophet Ahijah had given him the message from God that he would break the kingdom after the death of Solomon, due to the apostasy, and that he will give him ten tribes.8 Since then, the twelve tribes of Israel were left divided. The tribes of Judah and Benjamin made up the inferior or southern kingdom, called Judah, with Jerusalem as capital, and under the government of Rehoboam; while the ten northern tribes made up a separated government, known as the kingdom of Israel, with Samaria as capital governed by Jeroboam. God ordered it.9

Rehoboam tried to take advantage for three years of the sad experiment with which he started his reign; and this effort was prosper. He built and fortified cities to strengthen Judah.10 But the secret of the prosperity of the southern kingdom, Judah, during the early years of the reign of Rehoboam did not lie in these measures. It was because the people recognized God as the Supreme Leader, and this made the tribes of Judah and Benjamin to take advantage. Many God-fearing men, who came from the northern tribes, joined them.11 But Jeroboam did not trust in God, and the southern kingdom, Israel, had always little to do with the Lord.