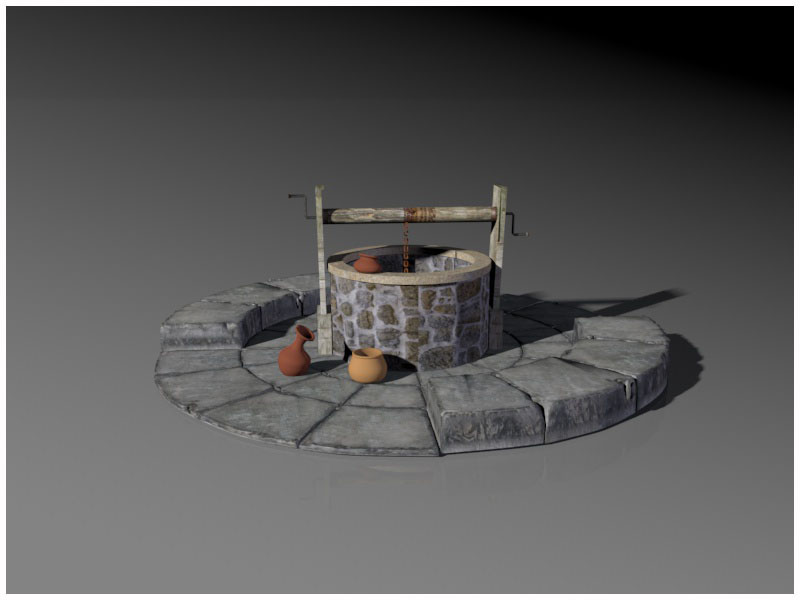 During a try to Galilee, Jesus went through Samaria, the most direct way. It was noon when he reached the beautiful valley of Shechem, a place with good pastures.1 At the entrance of the valley, at the foot of Mount Gerizim and next to a small town called Sychar, was the famous Jacob’s well. Tired of traveling, Jesus sat down there to rest while his disciples went to buy provisions.2 The well was known by that name, due to it was dug by Jacob. The whole family of Abraham, dug many wells on his pilgrimage along his life.3 It is also close to another well where Jacob first met his beloved Rachel. There he helped her to remove the stone from the well head so as Rachel, who was shepherdess, could watering his flock of sheep. It still exists today4 and still gives fresh water to those who approach to it. In the time of Jesus, Jews and Samaritans were bitter enemies, and they avoided dealing with each other whenever they could. The rabbis considered legitimate trade with the Samaritans in case of necessity; but they condemned all social intercourse with them. A Jew should not ask for anything to a Samaritan, not even a piece of bread or a glass of water. When the disciples bought food, they were acting in harmony with the custom of their nation, but they could not go further. Asking the Samaritans for a favour, or try to benefit them in some way were actions the disciples of Christ could not even considered. But Jesus did not think so.5

As Jesus was sitting on the edge of the well, he felt weak due to hunger and thirst. His thirst was intensified by the evocation of fresh water that was so close, but inaccessible to him because he had neither rope nor water jar, and the well was deep. He shared the fate of humanity, and waited for someone to come to draw water. A Samaritan woman then approached, and ignoring their presence, filled her water jar. When she was leaving, Jesus asked her to give him some water.6 Any oriental person would deny that favour. In the East water is called “the gift of God.” Offer drink to the thirsty traveller was considered such a sacred duty that the deserts Arabs do their best to fulfil it. The hatred that existed between Jews and Samaritans prevented the woman from offering kindness to Jesus; but the Saviour was seeking to find the key to her heart, and with the tact born of divine love, he did not offer a favour, but asked for one. Offering a favour might have been rejected; but trust awakens trust. The King of heaven presented himself to this outcast from society, asking a service of her hands. He, who had made the ocean, governing waters of the deep, who opened the springs and channels of the earth, rested from his labours at the well of Jacob and depended on the kindness of a stranger for a little thing as a sip of water.

The woman realized that Jesus was Jewish. In her surprise she forgot to grant the request, and so inquired the reason for such request. ‘How do you, being a Jew, ask me for water, a Samaritan woman?’7 Jesus replied, ‘If you knew the gift of God and who is asking you for a drink, you would have asked him, and he would give you living water’.8 That is to say, ‘You wonder that I ask you a favour as small as a sip of water from the well that is at our feet. If you had asked me, I would have given you to drink the water of eternal life’. The woman had not understood the words of Christ, but felt its solemn meaning. She began to change her carefree attitude. Assuming that Jesus spoke of the well that was in front of them she said, ‘Sir, you have nothing to draw with and the well is deep: from where then have you that living water? Are you greater than our father Jacob, who gave us the well and drank from it himself?’9 She saw in front of her only a thirsty, tired and dusty traveller. She compared him mentally with the honoured patriarch Jacob. Naturally she knew that no other well could be equal to the one dug by their parents. She looked back to the parents, and forward to the coming of the Messiah, meanwhile the Hope o her parents, the Messiah himself,  was beside her, and she did not know him. Jesus did not answer the question about himself immediately, but with solemn earnestness said: ‘Everyone who takes this water will be in need of it again; but whoever takes the water I give him will never be in need of drink again; for the water I give him will become in him a fountain of eternal life’.10 Who seeks to quench their thirst at the fountains of this world will drink only to be thirsty again. Everywhere there are men who are not satisfied. They crave something to supply the need of the soul. Only One can meet this need. What the world needs, ‘the desire of all nations’11 is Christ. The divine grace which He only is able to impart is like living water which purifies, refresh, and invigorate the soul.