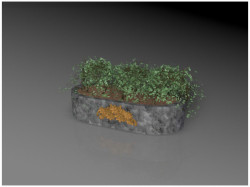 Jonah was a very special prophet. He had arguments with God. It was sent by God to preach to the city of Nineveh, announcing He will destroy it if they did not repent. Jonah knew God’s aim of forgiving the city which, despite its evilness, it was led to repent sackcloth and ashes. He should have been the first one in rejoicing at the great grace of God; but instead of doing so, he let his mind get confused by the chance of being considered as a false prophet .Jealous of his reputation, he lost sight of the value infinitely greater of the souls of that miserable city. Nevertheless, when Jonah noticed the compassion of God to the repented Ninevites, Jonah distressed him and he got angry!1 Once again, he gave way to the doubt, and once again he was weighed down with the dejection. Losing sight of other people’s interests, he was controlled by the feeling that it was better to die rather than seeing the city survive. The Lord asked him: “Is it right for you to be angry?”2

Jonah, outraged, went out of the city and built a shack in the East part of the city, and he sit down under it, in the shadow, until he sees what the city would become. And God made a miracle: he prepared a leafy plant, which grew up over Jonah, in a day! God did it because he loved him, “to give shade for his head to ease his discomfort, and Jonah was very happy about the plant”.3 The Lord then gave to Jonah an objective lesson: “But at dawn the next day God provided a worm, which chewed the plant so that it withered. When the sun rose, God provided a scorching east wind, and the sun blazed on Jonah’s head so that he grew faint. He wanted to die, and said, ‘It would be better for me to die than to live.’ But God said to Jonah, ‘Is it right for you to be angry about the plant?’ ‘It is,’ he said. ‘And I’m so angry I wish I were dead.’ But the Lord said, ‘You have been concerned about this plant, though you did not tend it or make it grow. It sprang up overnight and died overnight. And should I not have concern for the great city of Nineveh, in which there are more than a hundred and twenty thousand people who cannot tell their right hand from their left—and also many animals?’”4

Confused, humiliated, and unable to understand God’s aim to forgive Nineveh, Jonah had fulfilled, however, the assignment of reprimand that big city. He fulfilled the aim that God had when he sent him. The glory of his grace showed among the heathens. Those who had been “in darkness, in utter darkness,… cried to the Lord in their trouble” and “he saved them from their distress…, and broke away their chains… He sent out his word and healed them; he rescued them from the grave”.5 During his earthly ministry, Christ referred to the one well carried out by Jonah’s preaching in Nineveh, and he compared the inhabitants of that heathen center with the people that professed to belong to God in his time. He declared: “The men of Nineveh shall rise in judgment with this generation, and shall condemn it: because they repented at the preaching of Jonas; and, behold, a greater than Jonas is here”.6