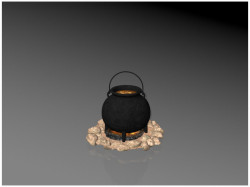 Jacob and Esau, the twin sons of Isaac, both present a surprising contrast as much in their life as in their personality. This inequality was predicted by God even before they were born. When he answered to Rebekah’s prayer, he announced her that she would have two children and he revealed her the future; he told her that both of them would be leader of a powerful nation but one of them would be stronger than the other, and the older would serve the younger.1 Esau was born first and he was redhead, his whole body was like a hairy garment and he became a skilful hunter, a man of open country that sought for his own satisfaction and all his interest was focused on the present, his adventures and his shoots. However, he was Isaac’s favourite son.2 Jacob, who came out with his hand grasping Esau’s heel, like it would be a signal;3 he was thoughtful, kind, a quiet man who liked to stay among the tents. He always was thinking more about the future than the present; he was content to live at home, occupied in caring for the flock and cultivating the land. Jacob was Rebekah’s favourite son.4

The promises made to Abraham and confirmed to his son Isaac, were shown to Jacob and Esau. The birthright was an issue of great importance, because it covered not only the inheritance of worldly wealth, but also spiritual pre-eminence. The person who received it had to be the family’s priest; and the Redeemer of the world would descend from his lineage. On the other hand, there also would be big responsibilities over the owner of the birthright. The one who inherited the blessings had to dedicate his life at the service of God. As Abraham, he had to obey the divine requests. He had to consult the will of God in the marriage, in his relationships with the family and in the public life. Esau did not love the devotion and he did not want the spiritual inheritance that entailed the birthright. Therefore, one day when he was coming from the open country, famished and tired, saw his brother cooking some lentil stew and he asked Jacob to give him. In exchange, Jacob, very calculating, asked to sell him his birthright. As Esau only cared about the fact that he was starving, so he swore an oath to his brother, selling his birthright to him.5 Esau, impulsive as usual, married two women without consulting God and they were a source of grief to Isaac and Rebekah.6

One day, when Isaac was old and his eyes were so weak that he could no longer see, before dying, he wanted to give his blessing that led to suppose the birthright. He asked him to go out to the open country to hunt some wild game for him; to prepare him the kind of tasty food he liked and bring it to him to eat, so that he gave him his blessing.7 Rebekah heard him and when Esau left, she took advantage of the occasion and instruct his son to take the place of his brother rapidly, dressing up and lying to his father. Jacob did it so and he was blessed by Isaac.8 When Esau came in from hunting and realized about the ruse and what he had lost. Thereafter a big hatred between the brothers was generated.9 And Jacob, advised by his mother and blessed by his father, had to flee to his uncle’s Laban house; so he never saw his parents again. Esau went far away too.10