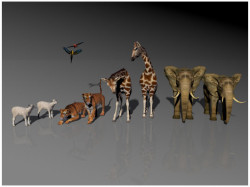 The descendants of Set were called “God’s children”, Cain’s, “men’s children”. When God’s men mingled between men’s children1, the first ones got corrupted and joined to Cain’s children to practice idolatry. A few ones feared and honoured his Creator. Noah and his family were in the little amount of fair people. The wickedness of manhood was so big, and increased so much, that God was sorry of having created man on the earth, since he saw their wickedness was a lot, “and that all the thought of their heart was bent upon evil at all times”.2 Noah was changed into a loyal preacher for 120 years3 to warn the world about the near destruction. The patriarch should preach people4, and also build an ark according to God’s instructions for his salvation and his family’s. Not only should he preach, but with his example building the ark, convince everyone that he believed what he preached.

“It was through his faith that Noah, when he had been warned by God of something that had never been seen before, took care to build an ark to save his family. His faith was a judgement on the world, and he was able to claim the uprightness which comes from faith”.5 God gave everyone the opportunity of regret and return to Him. But they did not believe in Noah’s preach.6 God decided he was going to execute a judgement in which, with an universal flood, would wipe life on earth, except those who entered in the ark Noah was going to build.7 God gathered all of the animals he had created in field and forest. They went by pairs, male and female, and clean animals in groups of seven.8 Noah accommodated them in the places he had prepared for them, and also eatables for all.9 Noah’s family was seven days in the ark before rain started to fall on the earth.10 In that time the got prepared for their long stay while water covered the earth. Despite the solemn demonstration of God’s power they had contemplated, the unusual presence of animals coming of field and forest towards the ark, impious hardened their hearts and continued entertaining and mocking of divine power.11 Seven days after they entered, it started to rain.12