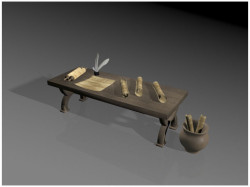 Parchment is a material made from animal skin; often calfskin, sheepskin, or goatskin. Its most common use was for writing on it. The origin of its name is the city of Pergamum where it is thought that was high productivity and high quality. Nevertheless, its existence dates back to an earlier age, when it coexisted during a long time with papyrus, the writing material prepared from thepapyrus plant, which was a very fragile and uncomfortable material, as much to the copyist as to the reader. Very gradually the parchment superseded papyrus because of its material advantages: it was an easier support to get than the papyrus, more durable and of better quality. By name, it is mentioned twice in the New Testament1, but there are other texts in which it is mentioned indirectly. Parchment was used for sacred writings and a large number of copies of those documents were found hundreds of years later. For its better conservation, the scrolls were put in a well-sealed clay jar.

A well-known case of this procedure is mentioned in the book of Jeremiah: “I signed and sealed the deed, had it witnessed, and weighed out the silver on the scales. I took the deed of purchase –the sealed copy containing the terms and conditions, as well as the unsealed copy– and I gave this deed to Baruch son of Neriah, the son of Mahseiah, in the presence of my cousin Hanamel and of the witnesses who had signed the deed and of all the Jews sitting in the courtyard of the guard. In their presence I gave Baruch these instructions: “This is what Lord Almighty, the God of Israel, says: Take these documents, both sealed and unsealed copies of the deed of purchase, and put them in a clay jar so they will last a long time”.2 The same prophet, Jeremiah, dictated Baruch son of Neriah all the words the Lord had spoken to him, and Baruch wrote them on the scroll.3 Jehoiakim king of Judah cut them off with a scribe’s knife and threw them in the fire.4 This message was written again in another scroll and many similar words were added to them.5