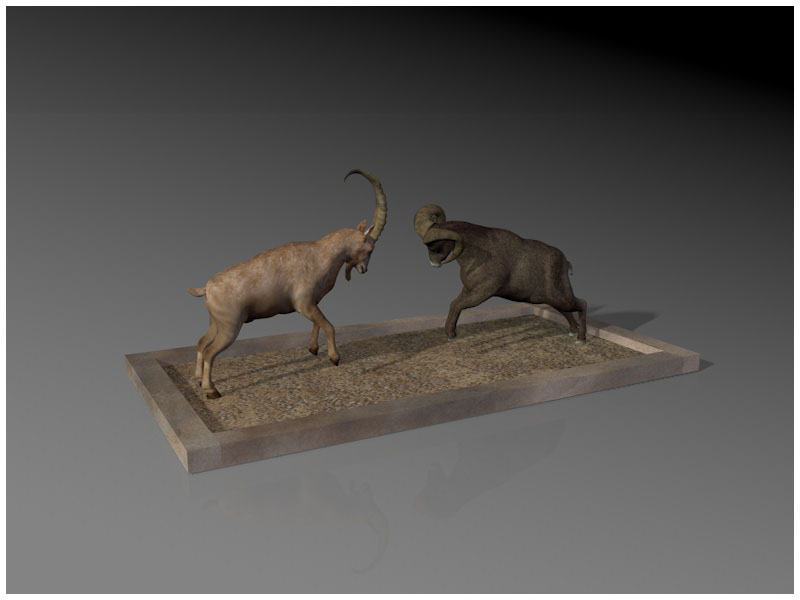 Unlike the dream Daniel had about the four beasts, two years later, God gave him a vision in broad daylight, when Daniel was by the Ulai River in Susa. Daniel related this vision with the previous prophecy  full of symbolic beasts.1 Although Babylon is not  mentioned this time, it was about to fall, the prophet sees two new symbolic beasts, that strangely represent two of the same empires which were pointed before: Persia and Greece. Clearly, the angel Gabriel, names them for their name.2 This time, instead of a bear, he sees a ram with two horns, one higher than the other3 (the Persians, always more important than the Medes) For two centuries, the empire of Medo Persia (soon known only as Persia) had not any rival, as indicated by the prophecy4, until Greece reached with its main king Alexander. In this prophecy this kingdom is not represented as a leopard but a goat with an only horn, its main king.5 The two beasts fought and the goat seemed to fly in his career. Persia, could do nothing to that force.6 As the prophecy says and confirms the history, when the great horn was at its highest point, it was broken and instead of it, four horns arose dividing the territory in for parts according to the cardinal points.7 That happened after young Alexander died. His main four generals divided the huge empire: Cassander, Lysimachus, Seleucus and Ptolemy. This prophecy points to the future as the previous two, the statue of the future and the four beasts.8

It is clear that God was confirming these previous prophecies about the future, even naming some of the empires, but something special happens in vision after the facts mentioned, which recalls the special attention of Daniel, as in the previous prophecy of the four beasts. From one of the cardinal points (the winds) emerged a little horn, a kingdom that began growing everywhere, first in an horizontal dimension on earth and apparently then in a vertical one against things related with heaven.9 That kingdom is Rome, the successor of Greece. It was a very strong pagan empire and is designated as the “desolated prevarication”10, because it acted against the glorious land, against the sanctuary, against the army of heaven and against her prince, referring to the destruction of Jerusalem and to the death of Jesus, the Messiah Prince. Even Jesus mentions this meeting, quoting the prophet Daniel.11

But after this, when the empire ended, a haughty king, successor of Rome, would act in the future with a deceptive and blasphemous attitude which was contrary to God, shattering truth and chasing the people of the saints.12 It was not a usual power because he did not acquire it by force.13 In his description, totally reminds the little horn which appeared in the prophecy of the four beasts, a religious political power. In the same way this power, called “man of sin” by the apostle Paul, will be finally broken, but not with human power, referring to God’s action in their trial against it.14 Daniel tried to understand all this, especially , all related to the time at the end of which the sanctuary would be purified. Although Gabriel is sent to explain Daniel the prophecy, Daniel could understand the historical part of the prophecy, but he did not understand the part referred to the sanctuary without purification for so long and action of fact that Gabriel said to him the action of the haughty king will remain to the end of time! That left him broken and sick for some days.15 That part of the vision was explained with detail years later to Daniel16, the next time that Gabriel was sent again.17 This can be seen in the description of the prophecy of the 2300 years. All that the prophecy predicted have been fulfilled in the pages of history, and we can be sure the rest will be fulfilled in order. Today the signs of the times declare that we are on the threshold of great and solemn events. The Bible and only the Bible, gives a correct view of these things. In it the great final scenes in the history of our world are revealed.