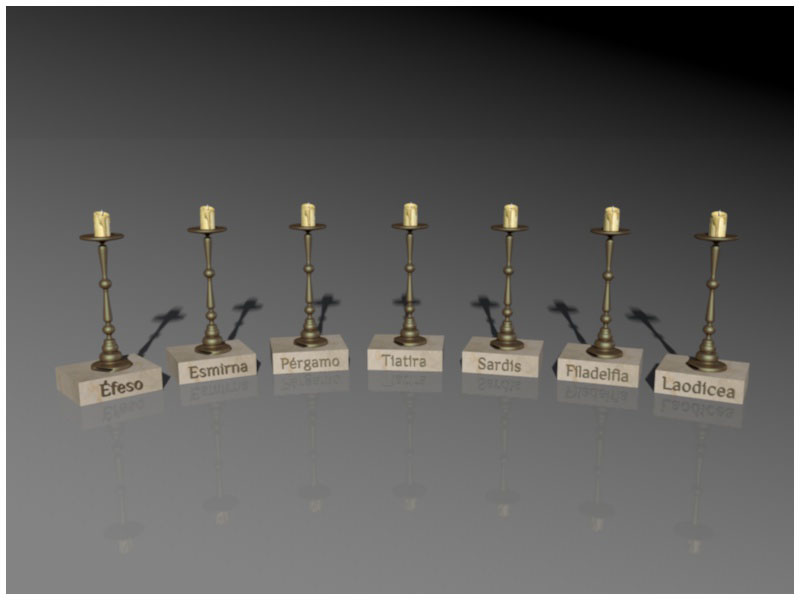 Ephesus, Smyrna, Pergamum, Thyatira, Sardis, Philadelphia and Laodicea. The seven churches mentioned in Revelation. Each of one was represented by a candelstick1, actually existed. They were seven Christian congregations in Asia which lived in the populations from which they take their names. This cities and their churches had different characteristics, which are mentioned because they represent the world church and its history over time. There were seven stages. One Saturday, God’s day2, the apostle John sees Jesus in a vision walking among seven candlesticks and received his order to write a book, Revelation.3 In Revelation are revealed the deep things of God. The name of the book was inspired in its pages: revelation contradicts the claim that it is a sealed book. A revelation is something revealed. The Lord revealed to His servant the mysteries contained in this book and its purpose is to be open to the study of all.4 His truths are intended to those living in the final days of the history of this land and those who lived in John’s days. In Revelation all the books of the Bible meet and end, in it we find the complement of Daniel’s book. One is a prophecy, the other a revelation. The book that was sealed is not Revelation, but that portion of the prophecy of Daniel which related the last days. The angel commanded, “But you, Daniel, keep these words in secret and seal the book until the final time”.5

The names of the seven churches are a symbol of the church in different periods of the Christian era. The number seven indicates completeness, and means that the messages extend to the end of time, while the symbols used reveal the condition of the church in different periods of history. It speaks about Christ walking among the golden candlesticks, which symbolize his relationship with the church. He is in constant communication with his people. He knows his real condition. The church was failures and needed to be corrected; so John was inspired to write messages of warning, reproof and entreaty to those who, having lost sight of the fundamental principles of the gospel, were risking the hope of salvation. But all the words of rebuke that God need to send are spoken in tender love and with the promise of peace to each repented believer.6 Christ was presented holding the seven stars in his right hand. This ensures us that any church that is faithful to its trust need to fear for destruction; because no star that has the protection of the Omnipotence can be plucked from the hand of Christ.

The church of Ephesus (Desirable) is presented as a symbol of the Christian church during apostolic days. Smyrna (Myrrh) represents the brave church during the persecution of the Roman Empire. Pergamon (Exaltation) represents the time when paganism was mixed with the truth, as a result of the work of the little horn, described in the book of Daniel: “It bears the mark of cunning and deceit”.7 The fourth commandment of God’s law was changed because the day of Lord (Saturday) was officially replaced by Sunday (the first day) as it was described by Daniel: “Times and laws will be changed”.8 Thyatira (Sacrifice), is the period of the church where only a few remain faithful to God and have not known ‘the depths of Satan,’ The church led from the Christian religious elite of Rome (papal Rome) kept to itself all the names, titles, privileges and symbols of imperial Rome. It is represented first as an adulterous woman, full of heresies, unlike the pure church9, and then it is symbolized by a blasphemous beast.10 This is the apostate church, which promoted the Inquisition, because “it fought against the saints and prevailed”.11 A political religious power that persecuted the true and loyal sons of God for a long time.12 Sardis (what remains) is the next stage of the church which describes the time of the Reformation, a return to the principles of the original message of the Bible; at least in part, because “its works are not perfect”.13 Philadelphia (Brotherly love) is the time of rebirth of the hope of the second coming of Jesus, the religious awakening and fulfilment of the great prophecies of the Bible. The book of Daniel is opened and finally understood. It is the time when the church is going to face a big test, its last stage before the coming of God.14 Laodicea (judgment of the people) the seventh and final stage of the church faces a great responsibility. It gets a triple and lasts reprimand, but it also is offered a solution for each of its needs. Laodicea is the time when the judgment in heaven is made and humanity is tried. Everyone has now the opportunity to open the door of their heart to Jesus.15