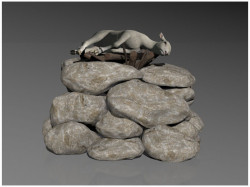 The Lord provided Adam and Eve with everything for their happiness, except one thing he forbade them1, and sadly they chose to believe the tempter and doubted the God of love, who had created them.2 Now that they knew evil and sin3 they had to suffer the consequences.4 Disobedience implied distrust and rebellion against the Creator who gave them life and sustained. This rebellion separated from God freely and spontaneously breaking situation the umbilical cord with the source of life that was God, and therefore death would be the result of their free choice. After they were expelled from Paradise5, Adam and his offspring had to present, according to God’s special indications, offerings for their sin due to the need of a substitute, a Redeemer.6 God organized a system based on humble obedience, so they expressed reverence for Him, and faith, together with dependence on the promised Redeemer, through the death of the first-borns of the herd and their solemn presentation on an altar along with their blood, as an offered holocaust to the Lord.7 This sacrifice would always remind them of their sin, but also of the coming Redeemer, who was to become the greatest sacrifice in favor of mankind at all times.

God gave them an example when sacrificing animals to cover the couple with their hides.8 This ceremony, ordered by God, was meant to be a constant reminder for Adam, likewise a penitential recognition of his sin. In order to atone it, the death of the beloved Son of God was required, the Lamb of God, who takes away the sin of the world.9 In the sinner’s minds the animal’s blood was meant to be related to the blood of the Son of God. The death of the victim was the evidence for the punishment of sin, which is death. Through sacrifice the sinner recognised his guilt and showed his faith, then could appreciate the immense and perfect sacrifice of the Son of God, prefigured in the animal’s offerings.10 Sin, the transgression of the Law of God, provoked a tremendous separation between the Father and mankind. Abel, son of Adam, feared God. He offered the best first-borns of his herd, as God had ordered11, and with humble reverence and full faith in the coming Messiah he presented his offering. God accepted it, that is why fire from heaven consumed the offering.