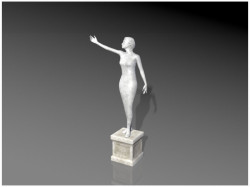 The statue of salt talks about a serious fact which happened on the destruction of the cities Sodom and Gomorrah, on the part of God. The first mention in the Bible about the cities Sodom and Gomorrah is related to the territory occupied by the Canaanites, descended from Canaan, son of Ham and grandson of Noah.1 God asked Abram to leave Haran and to move to a new territory.2 The patriarch obeyed, but when he was near Bethel he had to immigrate to Egypt due to the famine which affected the region.3 After coming back to Egypt, Abram and his nephew Lot established near Bethel.4 There were conflicts among shepherds of both of them, so Abram suggested splitting up and that each one occupied different territories. It was then when Lot chose to live in the plain of Siddim, where there were a lot of asphalt wells5, and in which there were Sodom and Gomorrah.6

Abram intervened rescuing his nephew Lot7, who had been taken prisoner, in a war of other cities against Sodom.8 Due to the sinful behavior of Sodom and Gomorrah, God told Abram his intention of destroying them, and the patriarch intervened trying to avoid that decision.9 God took Lot and his family out of Sodom and finally the city was destroyed with sulfur and fire, together with Gomorrah and other cities of the plain,10 as it was the case of Admah and Zeboim.11 The most shocking fact of this story is that Lot’s wife, having escaped death thanks to the angels sent by God, turn sadly back to see all she was missing. God had specifically prohibited, if they wanted to survive.12 As a punishment for her disobedience and for her choice of preferring material things, God turn her into a statue of salt13, staying there forever, while her husband Lot and his daughters continued their flight from the corrupt city of Sodom, from which comes the word “sodomy”.

It is believed that the cities of Sodom and Gomorrah were placed in some are near the Dead Sea, even though it has not been possible to place them exactly to the present day. Not only the Holy Scriptures mention these cities, but there is also another archaeological source outside the Bible. It is a little table written in cuneiform characters found in the ruins of Ebla.14 The texts that appear are economic texts and they mention different cities which traded with Ebla.