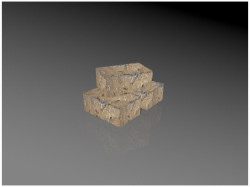 When the Hebrews who lived in Egypt were considered as a danger, they were made servants and finally slaves. They had been welcomed to Egypt when Joseph, son of Jacob, was so useful to the country. There was a huge famine in the land of Canaan and, when they arrived to Egypt, they lacked nothing. They had been given the best land, Goshen, where they lived in peace for many years. They did not even have to pay taxes to the state.1 But that generation went by and many time later, nobody remembered about why the Hebrews were there and people started to consider them dangerous, since they had grown in numbers, which seemed to be more than the own Egyptians.2 In their servitude, Hebrews were oppressed with charges of taxes and forced to build many storage cities for the Egyptians.3 “But the more the Egyptians oppressed them, the more they multiplied and spread. As a result the Egyptians loathed the Israelites, and they made the Israelites serve rigorously. They made their lives bitter by hard service with mortar and bricks and by all kinds of service in the fields. Every kind of service the Israelites were required to give was rigorous”.4

In Egypt, the most common building material were adobes or sun-dried mud bricks; the walls of the best buildings were built with that material, and then they were recovered with stone, and the production of those bricks required a large number of servants. Large quantities of straw were required, as the mud was mixed with the straw to stick well. When many years had gone by, Hebrews clamored God for their liberation5, so Moses, sent by God, came back to Egypt to ask the Pharaoh the freedom of the Hebrews. As an answer, the Pharaoh toughened even more the difficult living conditions and work of the Hebrews, so now they had to look for working material for themselves.6 This order caused great consternation among the Israelites throughout the land. The Egyptians commissioners had appointed Hebrew foremen to manage the work of the people, and these foremen were responsible of the production of those who were under their care. When the king’s demand came into effect, the people scattered throughout all the country to gather in stubble instead of straw; but it was impossible for them to do the quantity of work they used to do. Due to the failure, Hebrew foremen were cruelly whipped and all the protests were useless.7