THE BOOK OF THE SEVEN SEALS 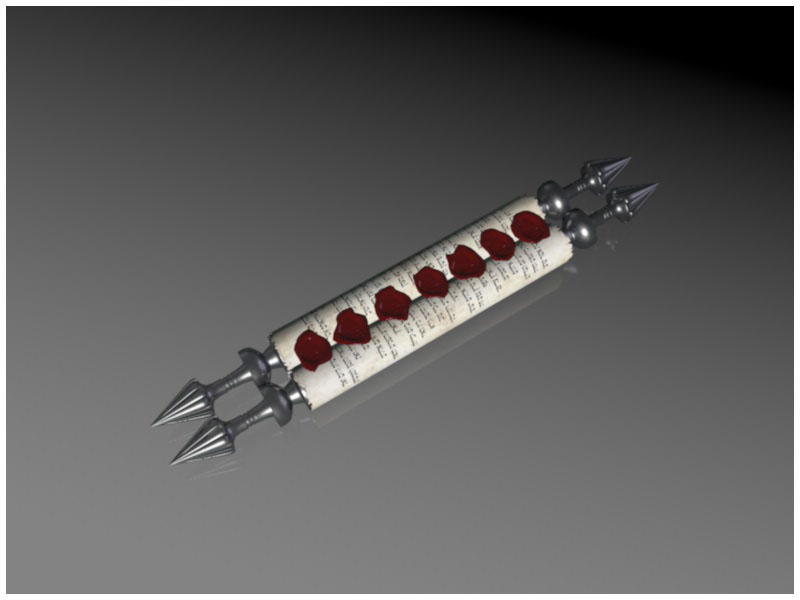 This is one of the most mysterious objects in the prophetic book of Revelation. It is presented in the right hand of God on his throne. The book is written not only in the inside but in the outside, although no one can read it, nor even remove its seven seals to open it, or even look at it. The only who is able to do it is Jesus who is presented in this first passage as the Lion of the tribe of Judah and the Root of David, and then as the immolated Lamb.1 He comes up and takes the book, in the heavenly worship shared with the Father, representing the act of enthronement of Jesus in heaven after his ascension.2 This scene of Revelation represent the traditional ritual of enthronement, because the tradition was that the new king must read aloud the Pact, the Law Book.3 The Lamb has seven horns representing that he has all the power.4 In addition, in this event, the seven spirits of God (the Holy Spirit) are sent to The Earth, representing the outpouring of the Holy Spirit in the Pentecost.5 The occasion is also the opening of the heavenly sanctuary and the beginning of Christ’s ministry there, in the Holy place.6 After taking the book, the Lamb opened the seals one by one. Every time he opens one of them, the apostle John is told and shown a symbolic vision of the future.7 All the seals must be removed to the book can be opened and read. When the seventh seal openes the book’s purpose will be understood. As the seven churches8, the opening of the seven seals presents the future history of the church in the same seven parts.

The first seal9: a white horse appears. Its colour is the colour of purity. It is rode by a successful rider. The pure church is still in its infancy and is guided by Jesus. It follows him faithfully. The second seal10: a horse as red as blood appears. The rider carries out a sword. It is the time of persecution of the Imperial Rome’s church. The third seal11: It is a black horse and rider with a scale. It is the opposite of white, indicating the total apostasy to the church. The religious political power of Papal Rome is established in Rome, with the union of state and church, totally contrary to the will of God.12 The fourth seal13: it is a light yellow horse ridden by Death and followed by destruction. It symbolize the ones followed and almost annihilated by the Inquisition. There was a huge ignorance of the Word of God and it was a horrible time for the church due to the dominion of the little horn as shown by Daniel’s prophecies.14 The prophecies of both books are complementary. The fifth seal15: The persecuted ones cry out for justice. They have the purity that gives the Word of God, represented by their white robes. It is the time of the Reformation. Finally they can freely speak and ask about when will the trial be, but it will take a little longer. The sixth seal16: the great signs that announce the end which were already predicted by Jesus take place.17 Although it is still not the coming of Jesus to earth he will soon act against the persecutors! The Seventh seal18: When it was opened, there was a short time of silence in heaven and are seven angels were given seven trumpets. Before they began to sound, an angel came with a gold censer and stood in front of the altar. The actions that this angel executed and the scenario are the same work done by the High Priest once a year on the Day of Atonement in the Spiritual Sanctuary.19 At that time, the village was also silent due to the expectation of the important things that will happen. The angel is Christ and the opening of the seal represents the beginning of the second phase of his intercessory ministry, which will take place into the Holy Place of the Heavenly Sanctuary, it means, the beginning of the trial explained by Daniel, in which the Son of Men came to spoke to the Elder.20 At this time the trumpets will sound and once the Angel finished his work, he will throw the censer with coals and without frankincense to the earth, symbolizing the end of probation and the opportunity for salvation. Once the seals are removed, the book can be opened and read, perhaps using its contents in the trial.21