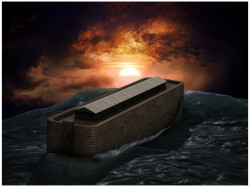 The incredulous crowd about Noah’s prophecy would think that the patriarch was deceiving them and that it was impossible the earth could be destroyed by a Flood. Before that the Lord God had not sent rain on the earth, but streams1 came up from the earth and watered the whole surface of the ground. When the period expired,2 Noah, his family and all the animals entered the ark and God shut them in.3 After the seven days, the floodwaters came on the earth.4 All the springs of the great deep burst forth, and the floodgates of the heavens were opened.5 And rain fell on the earth, without stopping, for forty days and forty nights.6 The howling of the water and the thunder, and the flashes of lightning had to terrified people and the animals. It was something they had not seen before.

Those who had despised Noah’s warnings and had ridiculed the faithful preacher of righteousness would regret their incredulity too late. The waters rose and increased greatly above the earth and the ark floated on the surface of the water, but God’s angels were protecting them from any harm. The people and the animals that were inside would be scared, but they had nothing to fear because God’s hands had shut the ark’s gate and he was at the helm of everything. All the high mountains were covered.There was an only ocean without beaches. Every living thing that moved on the earth perished –birds, livestock, wild animals, all the creatures that swarm over the earth and all mankind. Everything on dry land died. Every living thing on the face of the earth was wiped out. Only Noah was left and those with him in the ark. The waters flooded the earth for hundred and fifty days.7

God was taking care of them during the whole time they were inside the ark, which was more than a year,8 while it lasted the devastating effect of the Flood. Man’s great wickedness was the cause of the divine intervention.9 In God’s word, the same Jesus tells us before his second coming, that the world will repeat the same conditions of evil at the coming of the Son of Man as it were in the days of Noah before the flood.10 God gives us the opportunity to choose between good or evil. He wants the best for us.11 He hopes that we choose the good, but he will not force us, although he will definitely remove the evil forever. God wants our regeneration in his image and likeness, and his overall aim will be fulfilled at the second coming of Jesus Christ, but it can start here and now.12