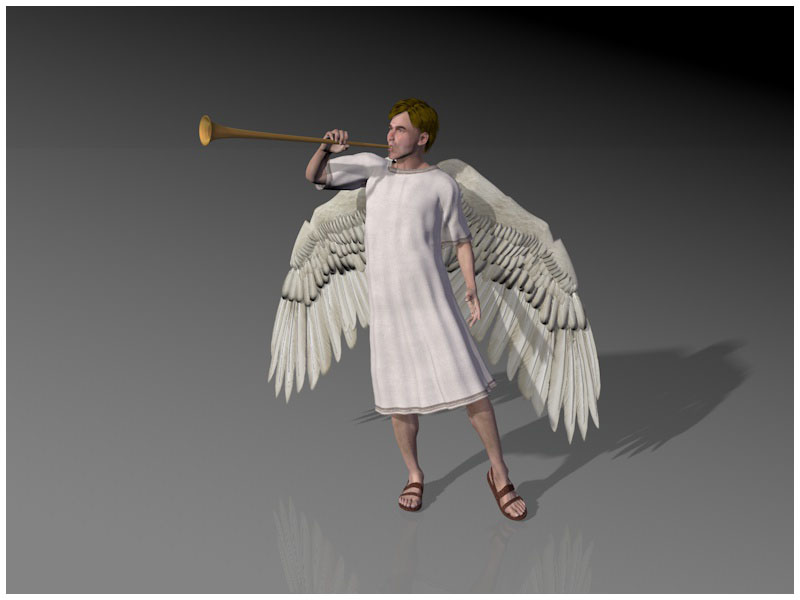 In the Bible, trumpets are usually elements of notice, call or alarm. The prophecy of the seven trumpets of Revelation1 comes after the book of the seven seals.2 They are consecutives and linked. In fact, the presentation of the trumpets happens during the opening of the seventh seal.3 When it was opened, there was silence in heaven for a short period of time and then seven angels were given seven trumpets. Before they begin to sound, an angel came with a gold censer and stood at the altar. The actions that this angel executed and the scenario in which he was, were the same work the High Priest performed once a year, the Day of Atonement, at the earthly Shrine.4 At that time, people were also silent. Silence is because of the expectation of the important things that were happening. What does this mean?

The angel is Christ and the opening of the seal represents the beginning of the second phase of his intercessory ministry, this time into the Holy Place of the Heavenly Sanctuary; or whatever it is, is the beginning of judgment in heaven, as it was also said by Daniel, when the Son of men came with the clouds of heaven, not on earth but in the presence of the Ancient.5 Once seals are removed, the book can be opened and read, perhaps using its contents in the judgment.6 As this occurs, the trumpets will sound one after another, and once the angel finishes his work, he will throw the censer with coals to the earth, but this time without incense. This symbolizes the end of probation and the opportunity for salvation. This provides a time frame on when they sound the trumpets. What do we notified the trumpets? These are things that will happen in the end of times. It represents the evil work of Satan, who has desired to destroy the earth with its inhabitants and especially the people of God. He knows he has little time to do it.7

The first three trumpets reproduce warnings of Jesus about the many wars and destruction of nature that will be before his coming. More than that, he said that nations would rise against each other, at a world scale.8 These destructions and the two world wars are reflected in his notice and also in the first two trumpets. The calamities came upon the people and the land. The Second World War ended with the fall of nuclear bombs on Japan. ‘As a great mountain burning with fire’ fell on the country whose sacred spiritual symbol is just a volcano, Fujiyama, or better, Fujisan.9 In the third trumpet, something bigger than a mountain burning dropped. It is ‘a big star’ on fire. It seems to be similar in nature to the previous one, but has a name: Wormwood, symbolizing bitterness. Wormwood is a Asteraceae plant with star shape. Wormwood is Chernobyl in Ukrainian and Russian. In addition to a city, it is a variety of common wormwood in that area which gave name to the city. The relationship is surprising, for the destruction that occurred there, especially by the ‘burning radioactivity’ produced in the burning of the nuclear ‘plant’, more than 500 times the nuclear bombs fallen in Japan.10 The fourth trumpet take us to another stage, from something that happened in the Earth to something that will happened in the sky11, as if now we move to a spiritual plane. What happens here is that something or someone, hurts the third of the sun, moon and stars, with the clear objective of prevent them to enlighten us. In a symbolic sense, the sun, the moon and the stars represent the people of God.12 The damage done to them represents the shaking, an action of Satan against God’s people, to obscure the message of the three angels. This message includes: the everlasting Gospel, worship the Creator of the Universe and the Sabbath, the seventh day of the week and memorial of our Creation.13 Satan promote the creation of civil Sunday laws.

The fifth trumpet14 reveals the evil action of someone clearly identified: the Destroyer. It is the fallen angel, Satan, the angel of the abyss. Is also the star or Lucifer who fell from heaven to the Earth.15 He was given the key to ‘the abyss’16, to release the ‘smoke’ and take his army to deceive the world. They are represented as locusts, horses, snakes or scorpions. They are like men or angels, but they are a lie, a demonic imitation of the real heavenly army.17 It is the greatest deception that the world will suffer. It is the imitation of the Second Coming of Christ, the coming of the Antichrist, predicted by Paul and John.18 Satan will pretend to be Christ. He will deceive the world, but he cannot harm those who have the seal of God on their foreheads. Keeping on Saturday or Sunday, then will make a difference. The sixth trumpet marks the moment of the end of probation, revealed in the last purifying action of the angel (Christ) in the heavenly sanctuary, in the gold horns of the altar19, when once accomplished all atonement, will say to the sixth angel who unleashed four angels or winds upon the whole earth.20 The seven last plagues will begin then to be poured out. At the sound of the seventh trumpet, concurring with the seventh plague, a voice will be heard from the Temple of Heaven saying that everything is over and that the kingdoms of this world are given to the Lord, Christ.21 It is also said that then will be the Armageddon, the time to destroy those who had destroyed the earth.22 It is time that Christ comes in glory to give reward to his men who have waited for him. In addition to the voice of God, The Celestial Temple will be open, and in it, the Ark of the Alliance23, containing the commandments of God. Including the fourth, his stamp of authority, Saturday.