THE TREE OF THE KNOWLEDGE OF GOOD AND EVIL 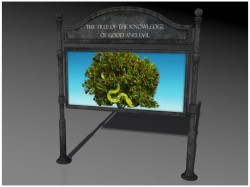 In the middle of the Garden of Eden, near of the tree of life, raised the tree of the knowledge of good and evil, especially destined by God to be a test of obedience, faith and love of Adam and Eve to Him. It had not really any especial attribute; it was just a simple test. The Lord God commanded our first parents not to eat from it, not even touch it because they would surely die.1 They were free to eat from any tree in the garden, but from that. God made for them all kinds of trees that were pleasing to the eye and good for food. There were abundance and beauty everywhere. God talked with them freely and they with him.2 Nevertheless, he did not put the evil out of their reach. He let Satan tempt them. They surely were told about the sad story of the rebellion and fall of Satan, the great conflict between good and evil that, according to the Bible, was originated in heaven because of the rebellion of Lucifer, now known as Satan. If they had borne the proof, they would have enjoyed the constant favour of God and the angels. Lord God wanted to prove their loyalty before they could be considerate eternally safe.

He would not force them to obey him; he would not deprive them of the right to act against they will; they were free beings gifted in natural moral, free to obey or disobey. Satan could have access to them on the tree of knowledge of good and evil, also called tree of knowledge, and he took possession of a serpent. Eve, one day, was contemplating the fruit of the forbidden tree with a mixture of curiosity and admiration. She saw that the tree was pleasing to the eye. Satan took advantage of the occasion and with a lie he addressed to her as if he would be able to divine what she was thinking: “Did God really say, ‘You must not eat from any tree in the garden’?”3 The interest of Eve was awoken. Instead of fleeing from that place, she stayed there to listen to the serpent. It was Satan who spoke, no the serpent. He wanted to confuse Eve and make her think that when she ate of the forbidden tree her eyes would be opened and she would have a new kind of knowledge more noble that they had reached until then. “You will not surely die,” the serpent said to the woman. “For God knows that when you eat of it your eyes will be opened, and you will be like God, knowing good and evil”.4 With that Satan showed God as a liar and selfish. He insinuated audaciousness that God had deceived them to prevent them to attain his level of knowledge.

Eve ate the forbidden fruit, and was delighted with it. Adam arrived later and he understood perfectly that his partner had violated the only prohibition that they were given. Adam saw that all was done, and as his love for Eve was so intense, totally disheartened he decided to share her fortune. He did not see any sign of death on her and he decided to face the consequences. He ate it and, as his wife, he did not feel its effect immediately.5 God did not take the right of eating the forbidden fruit from them. He let them, as morally free beings, to believe his word, to obey his commandments, and to live; or to believe the tempter, disobey and perish. Both ate the fruit, and the great wisdom they got was the knowledge of sin and guilt and that they had lost the divine protection. They realized they were naked and sewed fig leaves to make coverings for themselves, because, how could they appear naked in the presence of God and the angels?6