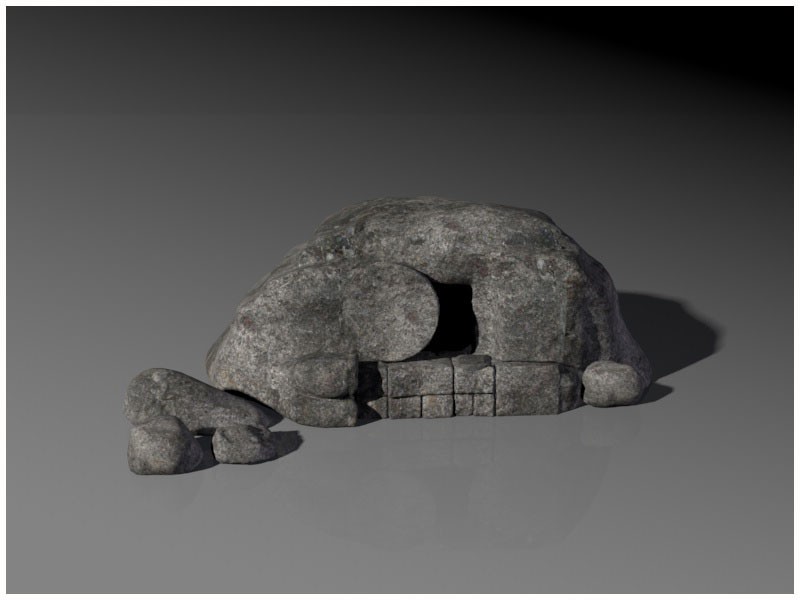 Jesus died on Friday, the day of preparation for Sabbath (Saturday)1, which at that time was also a very special day of Easter.2 As it was almost night, Joseph of Arimathea, an important figure, member of the Sanhedrin and a secret disciple of Jesus until then, asked the governor Pilate for the body of Jesus to take it to the tomb he owned, totally new and excavated in the rock. Pilate handed it, after checking with astonishment how quickly Jesus had died. Joseph wrapped it in a clean linen cloth to carry it to the tomb.3 With him came also another hidden disciple, Nicodemus4, who came bringing a mixture of myrrh and aloes of about 40 kilos. Both men of means and influence offered Jesus their gift of love, which had not been offered in life.5 Probably already in the grave, they wrapped it in linen cloths with those aromatic spices, according to the Jewish tradition of burying.6 For all we know, they also put a cloth over the head of Jesús.7 Before leaving, Joseph sent to roll a great stone to the door of the tomb. The tomb was in a garden, located right next to where Jesus was crucified.8 Several faithful women were in that place, seeing where they left the body.9 They also wanted to properly prepare Jesus’ body for burial, but being almost sunset, when the Sabbath was about to begin, they went home and prepared aromatic spices and ointments and rested the Sabbath day according to the command.10

The next day, the chief priests and Pharisees, overcoming all their principles and religious scruples, because it was Saturday and Easter, they asked Pilate to place a guard to secure the tomb, also sealing the stone.11 All this was for fear about what Jesus had said repeatedly about his death and his resurrection on the third day.12 They did not believe in it, but they feared that his disciples come at night, take him away and tell the people that he had risen. After the Sabbath, the day of rest, early on the first day of the week13, Mary Magdalene and other women came with the aromatic spices, to see the sepulchre, thinking about how they would remove the large stone from the door, but they found it removed and the grave empty.14 What had happened? An angel, whose appearance was like lightning and his clothing white as snow, came down from heaven producing a large earthquake and rolled back the stone on which he sat down.15 Another angel went to the tomb and there he was found by the women, and confirmed them that Jesus had risen, and told them to notify his disciples that he will meet them in  Galilea.16 They were frightened, with a mixture of fear and joy, but when they ran out, they found Jesus, and with great joy embraced his feet worshiping him.17 The Evangelists relate that, as Mary Magdalene was up earlier and was the first to arrive, was also the first to see the two angels and the first to see Jesus.18 When women gave their testimony to the assembled disciples, at first, they did not believe them19, but then Peter and John ran to the tomb, first arriving John, who was younger, and there they found that the facts were true, and they returned to his people with joy, although some of them still doubt.20

Meanwhile, what had happened to the brave Roman guards of the tomb? The priests did all they could to keep Christ’s body where he had been placed. A guard of soldiers guarded the tomb, possibly dozens of them, but when the angels appeared in front of them and the earthquake came, they all fell to the ground shaking with fear as if they were dead.21 They could do nothing, not even when they saw the Son of God leaving the tomb resurrected. When it was over, they did not dare to appear before the governor to notify the events they had lived which no one would believe. Surely they feared for their lives because they had failed in their surveillancemission and without even fighting. They went to the city and notified the chief of the priests, who gave them a lot of money to lie and say something incredible: that the disciples came by night and took the body, while they were asleep! They assured them that they would speak with Pilate to avoid Pilates’s wrath.22 Actually, there was only one option: that Jesus had risen. The words of Jesus were fulfilled: ‘I have power to give it up, and I have power to take it again’. ‘I am the Resurrection and the Life’.23 The resurrection of Christ is the symbol and guarantee of our own future resurrection24 and is part of the preaching of the Gospel.25 When Christ died, some graves were opened due to the earthquake and the dead buried there resurrected just after Jesus was resurrected. They testified in Jerusalem about this amazing event.26 Jesus’ tomb is empty, because he rose. The Lord, the Son of God who is equal to God27, became man, died on the cross being obedient and therefore, his name has been exalted above every other name.28