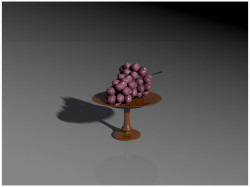 God took the Israelites out of Egypt to establish them in the land of Canaan. They had seen the power of God when they faced up to the biggest difficulties. Now, when they were about to start the last stage before going into Canaan, they hesitated and without trusting on the safe direction of God, they wanted to find out how was the land that God had promised as inheritance. The Hebrew host camped in Cades, in the desert of Paran, near the frontiers of the Promised Land. There, the people suggested sending spies to reconnoiter the country.1 Moses presented the case to the Lord and he gave him permission with the condition of choosing one of the chiefs of each tribe.2 Men were chosen as ordered, and Moses told them to go and see the country, what it was like, and what its location and natural advantage were, which people dwelled in there, whether they were strong or weak, many or few, and as well, to observe the type of soil and its productivity and to bring fruits of it.

The spies were 40 days3 and they came back from their expedition with samples of fruits that revealed the fertility of the land. It was in the time of ripe grapes, and they brought such a big bunch of grapes that they had to transport it two men. At first, people were happy to think of such a good land.4 But then, all the spies, except two of them, Caleb and Joshua, talked about the difficulties and dangers, about the big and walled cities, about that they had seen giants and it would be impossible to defeat them. They said it was useless to think of taking possession of the land. The people were disappointed and desperate. Caleb said: “yes, the walls are high, and the Canaanites are strong. But God has promised the land to Israel. Let us go up at once and possess it; for we are well able to overcome it”.5 But the ten spies insisted on being negatives. This was soon followed by the open rebellion and the insurgency of the people. They cursed Moses and Aaron, forgetting God could hear them. They protested bitterly: “Oh, that we might die in the land of Egypt or that we might die in this wilderness!”6

God gave them what they had asked and nobody older than 20 years would go into Canaan, only Caleb and Joshua, for they had another kind of spirit inside.7 Just as the spies had been forty days travelling, the hosts of Israel were going to make a pilgrimage on the desert for forty years and die in there.8 The events, which took place in Cades-Barnea, became an historical milestone in the life of the people of Israel due to their spiritual connotations, and it was called the great provocation.9