UR OF THE CHALDEANS AND ABRAHAM 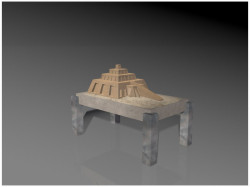 The city of Ur was in southern Mesopotamia1, and it was a Sumerian city. Today its ruins are located 350 km southeast of Baghdad (Iraq) and 16 km from the shore of the Euphrates current; however once the river ran beside the city and there it flowed into the sea, which is far from there now.

Ur of the Chaldeans was one of the most cultured and developed cities of that time, and also a large shopping center with its seaports. Its inhabitants possessed a cuneiform writing and a strong mathematical background. The main god of Ur was the god moon Nanna in his honor a ziggurat (Mesopotamian temple tower-shaped or pyramid) was erected in the XXI century BC. It originally consisted of three levels, but in the Neo-Babylonian Empire was built up to seven floors.

The family of Abram, later called Abraham, was from Ur.2 God called him and his family to leave Ur to Canaan land. Obeying God, he left his comforts of the rich city of Ur and went out with his father Terah and his brothers, and first settled in Haran, a city north of Mesopotamia. Following the death of Terah, Abram continued God’s call3, and was with his wife Sarai, his nephew Lot, his servants and many cattle towards Shechem, already in Canaan. Along with the call, Abram received the promise that God would make of him a great nation, and through him all the families of the earth would be blessed. So God changed his name to Abraham, “Father of multitudes of people”4, as his wife Sarai, which God named Sara, “Princess”, because she would be the mother of kings´nations.5