WRITING ON THE WALL 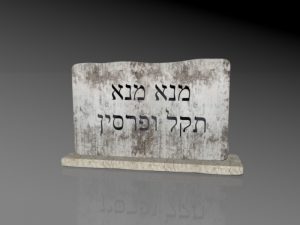 While the imprudent and weak king Belshazzar, last sovereign of Babylon, was celebrating a banquet with his court, he had the great idea of using the gold goblets that Nebuchadnezzar his father had taken from the temple of Jerusalem.1 The king wanted to prove that nothing was too sacred to hold in his hands. Babylon was being besieged by Cyrus king of Persia, nephew of Darius the Mede and the general of the combined armies the Medes and the Persians. But inside the fortress, apparently impregnable, with its solid walls and gates of bronze, protected by the Euphrates and provided with plenty of supplies, the voluptuous and arrogant monarch felt safe and devoted his life to the joy and orgies.2In his pride and arrogance, with a temerarious feeling of security, “Belshazzar gave a great banquet for a thousand of his nobles and drank wine with them”.3

Suddenly the fingers of a human hand appeared in front of the frightened nobles and especially of king Belshazzar and wrote on the plaster of the wall4 a strange writing in Aramaic that nobody could read.5 This is the inscription that was written:

In the text, this inscription is not translated literally because its meaning has to do with monetary units. But it was Daniel the prophet who, at the request of the king, told him what the writing meant. The ancient Aramaic was written without vowels, this hindered its compression for those who did not know the language. Daniel was a scholar of his times and he could interpret the writing of the wall: “Mene: God has numbered the days of your reign and brought it an end. Tekel: You have been weighted on the scales and found wanting. Peres: Your kingdom is divided and given to the Medes and Persians”.7 These words predicted the end of the Babylonian kingdom and the start of a new age under the Persian control. The story ends with the king appointing Daniel as a major figure of the kingdom8, and the invasion of the city of Babylon that night and the death of Belshazzar.9