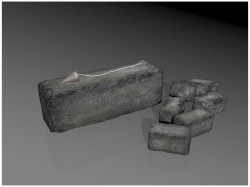 The history of nations speaks to us today. God assigned a place in his great plan for each nation and person. Nowadays, people and nations are tested by the plumb line that is held by the Holy One who does not make mistakes. By their own choice, everyone decides their faith, and God governs everything to accomplish their purposes.1 The sons of Israel were exiled for seventy year, and in the reconstruction, God had to guide them in the great difficulties. Cyrus king of Persia entrusted Zerubbabel descendant of David2 the responsibility of act as the governor of the first company that returned to Judea; and with him went his associate Jeshua the high priest. Immediately, they began to rebuild what had been demolished and destroyed.3 All assembled as one man, rebuilt the altar and restored the holy services that were interrupted when Jerusalem was destroyed by Nebuchadnezzar. Before they settled in their homes they were trying to rebuild, “Then in accordance with what is written, they celebrated the Feast of Tabernacles”.4

The builders determined to get ready the materials for the construction, they found among the ruins some of the enormous stones that were bring to the temple in Solomon’s time. Besides those stones, they were provided with a lot of new material; so that soon the work had progressed to the point that the cornerstone had to be laid. This was done in the presence of many thousands who had gathered around them to watch the progress of the work and to express his joy for having a part in it. When the builders laid the cornerstone of the temple of the lord, all the people accompanied by the priests in their vestments and with trumpets, and the Levites (the sons of Asaph) with cymbals, took their places to praise the lord.5 Because of the ingratitude and the disloyalty they had shown, they were scattered among the pagans. The conditions had changed. With tender mercy, the lord had visited his people again and had let them return to their land.6 The regret for the past mistakes should have been replaced by a great joy. God had moved the heart of Cyrus king of Persia to help to build the temple. The promise was literally fulfilled: “The hands of Zerubbabel have laid the foundation of this temple; his hands will also complete it”.7