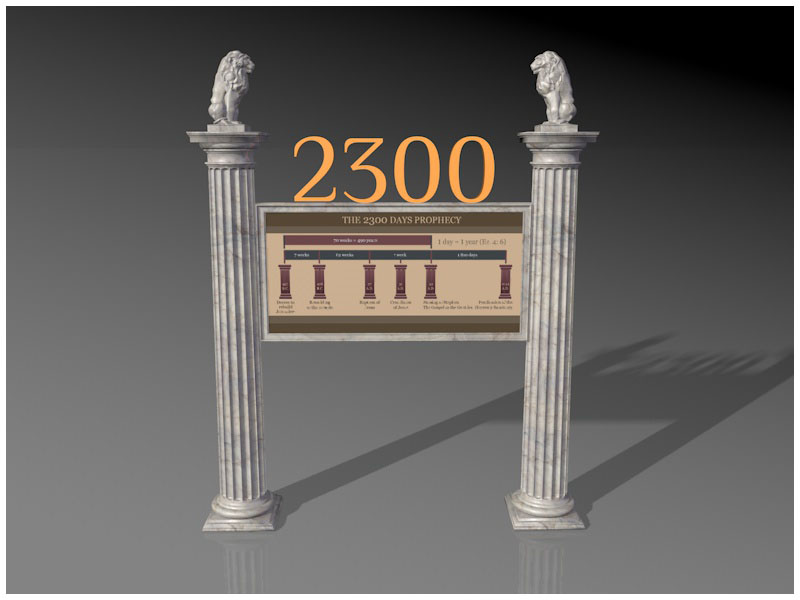 Some years after receiving the vision of Persia and Greece (the two-horned ram and the goat of a horn), during the empire of Medo-Persia, Daniel prayed one day for his deported people, asking God for forgiveness and help.1 It was at that moment, when the angel Gabriel was sent from heaven to explain to Daniel the part of the vision he had not understood and made him being sick, that is, the 2300 evenings and mornings. The angel told him it was true so he had to remember it for a long time because after that time “the sanctuary will be purified”.2 The angel insisted: “I have come to tell you… understand the order and the vision”. As we know, Daniel was concerned about the situation of the devastated sanctuary which will not purified until 2300 evenings and mornings. That meant 2300 years, because in a prophecy one day (morning and evening) represents a year.3 That was too long to Daniel, in fact this prophecy will not be fulfilled as the angel said, until the end of time arrived. When God would act against the apostate powers of this world as the little blasphemous horn.4 Gabriel explains that in the prophecy or vision (marah in Hebrew) there were “seventy weeks” left to the Jews. This represents 490 years, divided into three parts: seven weeks (49 years), sixty two weeks (434 years) and a week (7 years), this last one divided into two equal parts.5 But, when was it going to start? Immediately, Gabriel says, “from the imposition of the command to restore and build Jerusalem”.6

Just before praying, Daniel was studying Jeremiah’s prophecy which spoke about the end of the 70th anniversary of the deportation of Jews to Babylon. They should be given soon an order to go back and fulfill that part of the prophecy: to rebuild Jerusalem, the wall and the temple. Tracing in the Bible, we find that occurred in the fixed time, under the direction of the prophets Ezra and Nehemiah, and three times, in order of Cyrus and Darius and Artajerjes.7 That happened in the year 457 BC and from there began the 2300 years, most long time prophecy of the Bible. The seventy weeks were intended to finish the transgression, to put an end to sin, to atone for iniquity and bring in everlasting righteousness. According to the rest of the Bible, that just might be done by the Saviour of the world, the Messiah (the Anointed One), Jesus Christ, through his sacrifice. And that is exactly what this prophecy says it would happen, “Messiah’s live will be taken”, “half of the week the sacrifice and the offering will be stopped”. Christ’s death three and a half years (mid-week) after his baptism and anointing marked the end of sacrifices that represented him, because he is “the Lamb of God who takes away the sin of the world”.8

The prophecy says that at the end of the 2300 years, “the sanctuary will be purified”. What does it mean? The temple rebuilt in the time set by the prophecy, was shot down again in the year 70 by the Romans, as Jesus prophesied9, and has never been rebuilt. What Sanctuary was he referring to if there was none on Earth? And when would that be? The Bible only speaks about another sanctuary, the true one, the heavenly sanctuary.10 Moses did the Sanctuary according to this real model.11 The apostle Paul explained this, saying that the earthly sanctuary, its furnishings and service were a symbol or shadow of heavenly things and priests also represented the only heavenly High Priest, Jesus Christ, who began the heavenly ministry after ascending heaven.12 But he adds that in the same way that the earthly sanctuary was cleaned once a year, the Heavenly Sanctuary needed to be as well purified.13 This is what the prophecy is referring to. What is purification? Is the judgment that God said would take place before the second coming of Christ, as the prophecy of the four beasts presented, when the Son of Man came to the Elder in heaven and the trial began.14 The apostle Paul says the same about the Sanctuary: first it will be the trial and then Jesus will come. He did not make any reference to sin, because everything will have been purified in the Heavenly Sanctuary.15 This also appears in Jesus’ parable of the wedding dress.16 The Sanctuary purification the sanctuary involves an investigation work, a work of judgment. This work must be done before Christ comes to redeem his people, because when he comes he gives a reward to each one according to their works. Today Christ still intercedes for us, while the trial continues, but it will conclude soon.17