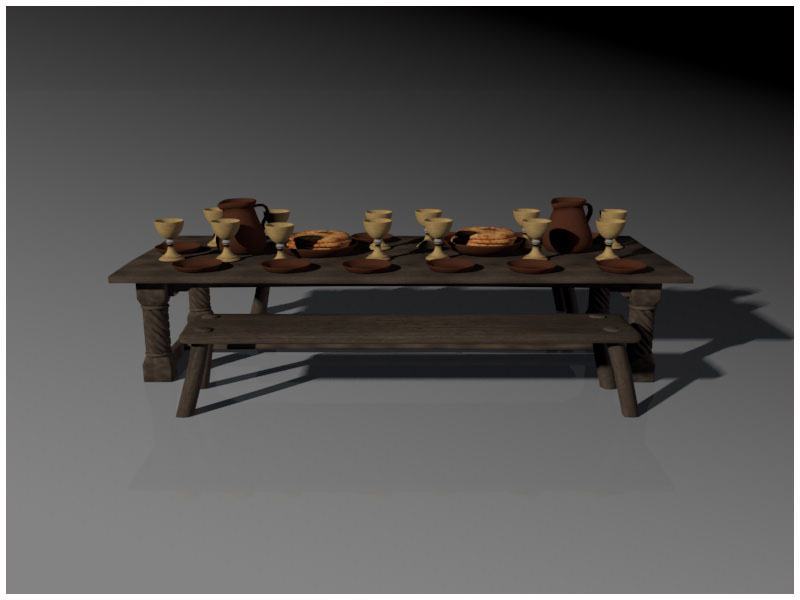 When God’s people were in slavery in Egypt, before last plague God sent the Egyptians to allow his people out, he commanded Moses to teach his people about Easter´s event. They had to take a year old faultless male lamb and live with it. On the 10th of Nisan they had to keep it away and separately until the 14th of that month, when it had to be sacrificed. The blood of the lamb was to be anointed in the two columns and the lintel of the door of each house. That night, when the angel of God scours the land of Egypt to kill the firstborn, all the doors marked with the blood of the lamb, would be free of the extermination of the firstborn. In this way, God would go “above” those houses and would continue to apply its judgment on the egyptians.1

The Jewish families should eat that roasted lamb along with unleavened breads (the house must also be cleaned of all leaven) and bitter herbs. The lamb had been killed so death will not smite the children of Israel. Wherever the Angel went and found the poles houses stained with blood, passed by and did not kill in that house, “he passed over” (that means the word Easter) because someone had died (the lamb). Therefore, God taught the people that they should keep the feast of Easter (Passover) to remember forever as God delivered the Israelites from slavery, and pass it through generations. They must do so in front of their children, who would observe vigilant everything that was done and how “hurriedly” unleavened bread, bitter herbs and roasted lamb were eaten. Then they would ask: Why are you doing this, what does it mean? And parents should explain them the meaning of Easter.2 This ceremony had a much more important aspect than the deliverance from Egypt. It pointed to the future, when “the Lamb of God” Jesus Christ, would be sacrificed for mankind on a cross, so they were delivered from spiritual slavery, from sin and form Satan.

Before Christ was sacrificed on the cross of Calvary and give his life for the sins of mankind, the Bible says that he sat at the table with his twelve disciples and shared with them what we know as the ‘Last Supper.’ That day Jesus instituted the New Covenant, “When they were taking food, Jesus took bread and, after blessing it, he gave the broken bread to the disciples and said: ‘Take it; this is my body’. And he took a cup and, having given praise, he gave it to them, saying: ‘Take of it, all of you, for this is my blood of the testament, which is given for men for the forgiveness of sins. But I say to you that from now I will not take of this fruit of the vine, till that day when I take it new with you in my Father’s kingdom’”.3 In this ceremony the people of God under the New Covenant commemorates the work of Christ on the Cross of Calvary, but not only we look back “announcing his death” but we look to the future when Jesus Christ returns in glory to his owns. Because of that the Apostle Paul says that we have to celebrate it “until He comes”.4 Our Easter is Christ.5