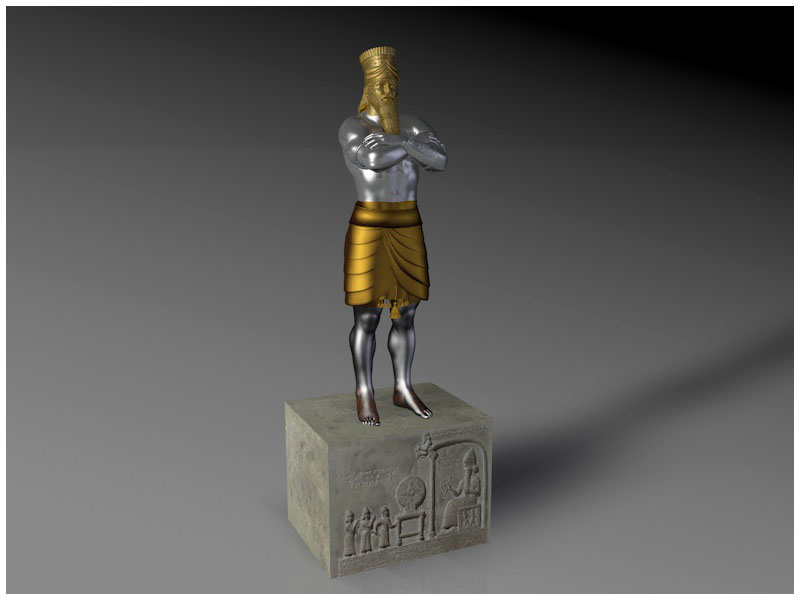 One night, Nebuchadnezzar, king of Babylon, had a very special dream. He had just slept thinking about what would happen in the future. God showed him in a shocking, graphic and clear way in the dream.1 The fact is that the king awoke, very impressed, but having forgotten the dream content. Despite their requests and death threats, none of the wise men of his court could decipher what his dream meant, because no one could know what had dreamed.2 Only one, the prophet Daniel, said that the true God of heaven was the only one who could give him an answer.3 Daniel asked the king for some time and along with his three Jewish friends, prayed to God for his help.4 That was how, during a night vision, the secret was revealed to Daniel, so Daniel blessed the God of heaven.5 Then he told the king what he had first dreamed and what it meant that dream: “Your Majesty saw a great image. This image was very large, and its splendour was awesome. It stood before His Majesty, and looked terrible. The head of this image was made of fine gold, its chest and arms were made of silver, its belly and thighs were made of brass; its legs were made of iron, its feet were partly iron and partly clay. While His Majesty watched, a huge stone fell off a mountain and struck the feet of iron and the clay of the image broke down. Iron, clay, bronze, silver and gold shattered, becoming like the dust of wheat milled in the summer, and the wind carried them away without leaving a trace. However the stone that struck the image became a great mountain and filled the whole earth’.6

Daniel told the king that the golden head of the statue, which explained the future, represented him and his empire, Babylon. This empire was followed by a lower empire, known by history as the Persian or Medo-Persian Empire, which was formed by two communities, although the Persians were dominant. This second kingdom was represented by the chest and arms of silver. In the descending scale of metals, bronze followed the silver, forming the belly and thighs and representing the following empire: Greece. This was succeeded by Rome, the legs of iron, which as the dream of the statue indicated, was succeeded by a series of small kingdoms, represented by the feet and toes. Some parts were strong as iron and others were weaker, as clay.7 Despite various attempts to link these kingdoms, repeated over time and still in Europe, descended from Rome, prophecy stands they would not join. That is why nowadays there are in Europe strong and weak kingdoms or countries, joined in an inconsistent and unequal way.8 The prophecy of the statue of the future concludes with the vision of a stone which strikes the statue on its feet by divine and not human intervention the statue on its feet crumbling it completely.9 According to this prophecy, God will intervene at this time, the last of the history of this world, to end human divisions as we know them and to create a single eternal kingdom, in which He will be the King. Nebuchadnezzar humbly accepted what the true God had revealed to him, giving him honour and praise, and also rewarding its faithful representatives, Daniel and his three friends.10 Few years later, God gave Daniel a dream more detailed about the world’s future and also the people of God, but with other symbols: the four beasts.11