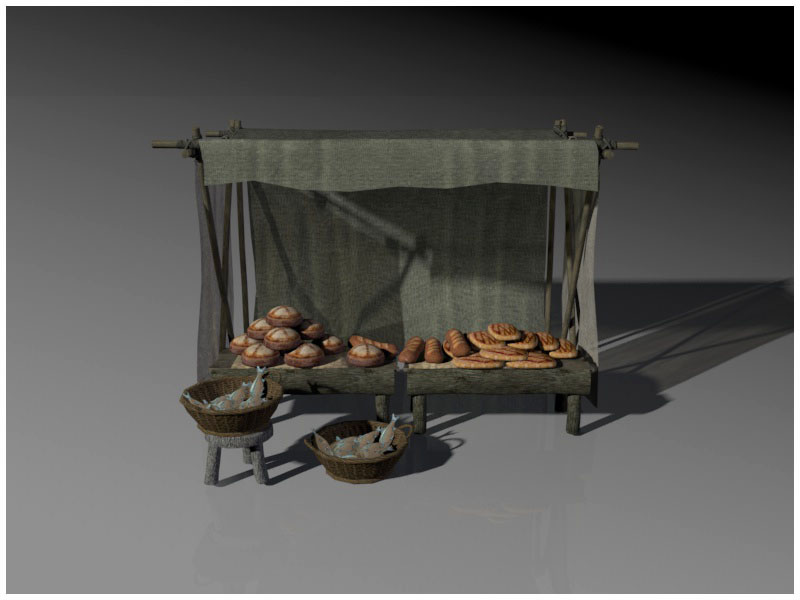 Fishes and barley breads were the daily food of the fishermen living around the Sea of ​​Galilee. These simple foods had a very special role in one of the most amazing miracles of Jesus. Twice, Jesus fed a crowd of several thousand people with just a few breads and fishes. Miraculously, the pieces of bread and fish that he was cutting for distribution multiplied in his hands, materializing at that moment. It must have been something spectacular and figures give a good account of it. In the first ocasión1, groups of pilgrims from near and far away, who went to Jerusalem for Easter, gathered to see Jesus. Their number grew until ‘around five thousand men gathered; besides women and children’.2 People listened to the words of mercy flowing from the lips of the Son of God. It had passed the day, the sun was sinking in the west, and people kept there.

Many had come from far, and had not eaten since morning. In villages and surrounding villages they could obtain food. But Jesus said, ‘Give them something to eat’3 and then turning to Philip, he asked, ‘Where shall we buy bread for these people to eat?’4 He said to test the faith of his disciple. Philip looked at the sea of ​​heads, and thought it would be impossible to provide food to satisfy the needs of such a large crowd. He answered that two hundred pennyworth of bread would not be enough for everyone. Jesus inquired how much food could be found among the crowd. ‘There is a boy here, Andrew said, who has five barley breads and two fishes; but what are they among so many people?’5 Jesus ordered him to bring these things and then asked the disciples that make people sit down on the grass in groups of fifty or a hundred in order to be witnesses of what he was going to do.6 Then, Jesus took the food, and looking up to heaven, he blessed, and brake them, and gave the breads to the disciples, and the disciples to the multitude. And they all ate and were satisfied. And they took up twelve baskets full of broken pieces of leftover breads and fishes.7 With this miracle Jesus wanted to give them several lessons: We must always rely on the power of God, because all things are possible to him, in second place, we must give importance to the little things, we must not waste any of the blessings God bestows upon us, food is a blessing from God and every piece of ‘bread’ has great value and significance, because there is many starving people.

God wants us to recognize him in his gifts, so that they became, as he wanted, a blessing for us. To this end the miracles of Christ were performed. The one who had given the manna was among them. It was Christ himself who had led the Hebrews through the dessert, and had daily fed them with the bread of heaven. This food was a figure of the true bread from heaven. The Spirit flowing from the infinite fullness of God and gives life is the true manna. Jesus said, ‘The bread of God is the bread which comes down out of heaven and gives life to the world’.8 Still thinking that Jesus was referring to the temporal food, some of his hearers exclaimed, ‘Lord, give us always this bread’. Jesus spoke then plainly: ‘I am the bread of life’.9 On the second occasion where there was a similar miracle10, Jesus went to a mountain and there the crowd came to him bringing their sick and lame people to is feet. He healed them all; and people, though pagan, glorified the God of Israel. For three days this crowd continued surrounding the Saviour, sleeping outdoors at night and crowding eagerly to hear the words of Christ and see their works during de day. At the end of the three days, their supplies were depleted. Jesus did not want to let go hungry people, and he invited his disciples to give them food. They brought what they had: seven breads and two fishes. The crowd was fed, and there were seven large baskets of leftover fragments. Four thousand men, besides women and children repaired their forces and Jesus let them leave full of joy and gratitude.