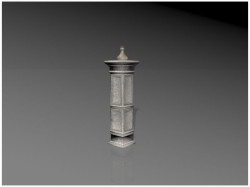 A balm is an aromatic and oily resin produced by different trees and bushes. In biblical times, there was a famous balm, the Balm of Gilead, region on the east of the Jordan River. It was very valued for its medicinal properties. It was even superior to the valued balm produced in Egypt, which had the reputation of having good properties. The first mention of such a special balm is in the story of Joseph, which was sold by his brothers to a caravan of Israelite merchants who were precisely from Gilead to Egypt, carrying among other products, the famous balm.1 Jacob, his father, also send this balm as a present to Egypt, for he considered it as “the good crops of the land”.2 The balmy oil, considered a luxury in the Middle East, was used to manufacture incense and perfumes. In fact, it was one of the ingredients of the holy oil of unction and the incense the Israelites used in the tabernacle shortly after going out of Egypt.3 The young Jewish woman Esther, who became queen, received a good beauty treatment during, at least, six months with oils, aromatic perfumes and ointments for women, before appearing before the Persian king Ahasuerus.4 The prophet Ezekiel also mentions among the goods that Judah and Israel exported to Tyre.5 Women prepared aromatic spices and ointments for Jesus’ body.6

But the most special mention about the balm is the one from the prophet Jeremiah, when he sadly asked: “Is there no balm in Gilead? Is there no physician there? Why then is not the health of the daughter of my people recovered?”7 He was talking about the lamentable spiritual state of the Israelites. They did not look for help in God and however, they were associated with heathen people, as Egypt. Their problem and necessity were well described by Isaiah.8 But Israelites denied changing their attitude. They did not admit they were suffering a spiritual illness which is the sin, neither had they looked for treatment. That is why they did not receive the spiritual “balm” of the Lord. Christ is the doctor and the spiritual balm. In Nazareth synagogue, Jesus said: “The Spirit of the Lord is upon me, because he has anointed me to proclaim good news to the poor. He has sent me to proclaim release to the captives and the regaining of sight to the blind, to set free those who are oppressed, to proclaim the year of the Lord’s favor”.9 He assigned that same work to his disciples. He said to them: “You are the light of the world… let your light shine before people, so that they can see your good deeds and give honor to your Father in heaven”.10 The solution to our spiritual problem is not outside of God. There is also today Balm and Doctor for everyone in “Gilead”.11 God wants to heal us from sin and give to us a new life.