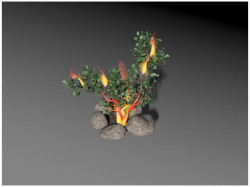 One day, while Moses pastured their flock near Horeb, “mountain of God”, a lonely and desert place, he saw a burning bush.1 But the extraordinary thing was that the bush was burning but not consuming. Its branches, its foliage, its stem, all of this were burning, and however it did not seem to be consuming. Moses approached to see that marvelous scene, when a voice that came from the flames called him by his name.2 In front of the burning bush, God’s voice ordered Moses to take off his sandals, since the land where he was, was holy because of God’s presence. In that way, it is constantly taught that those who want to approach God’s presence should move away from any impurity. The God of his father, of  Abraham, of Isaac and Jacob, the “Angel of Jehovah”, who identified as the great “I AM”, the one who is by himself, the Omnipotent, would have descended to earth3 and was calling him from the bush. Forty years after his flight from Egypt, God called him to release his people from slavery in Egypt. The divine mandate found Moses without confidence in himself, slow to speak and shy. He was overwhelmed with the feeling of his incompetence to be the spokesperson of God to Israel. But once he had accepted the assignment, he carried it out with all his heart, putting all his trust on the Lord. The nobility of his mission demanded to exercise the best faculties of his mind. God blessed his prompt obedience and he became eloquent, convinced, serene and fit to the biggest work ever given to any man. This is an example of what God does to strengthen the character of those who trust completely on him, and carry out his mandates without any reservations.

When Christ was about to visit our world and become incarnate, being God, he took shape of servant.4 If he had appeared with the glory he had with the Father before the world was, we could not have endured the light of his presence. His deity was covered by humanity; the invisible glory took a visible human shape. This great purpose had been announced through figures and symbols. The burning bush, in which Christ, the Angel of Jehovah, appeared to Moses, revealed God.5 The symbol chosen to represent the Deity was a humble bush which had no attractive features apparently, but which contained the Infinite6 The God, who is all mercy, looked after his glory in a very humble figure, so that Moses could watch it and survive. The glory of God was softened and kept vigil his majesty, so that the weak vision of finite men could contemplate it. That is why Christ had to come in “our vile body”7, being made “in human likeness”. He did not have a beauty which made him being desired from the eyes of the world; however, it was God embodied8, the light of heaven and land. His glory was kept vigil, his nobility and majesty hidden so that he could approach sadden and tempted men.