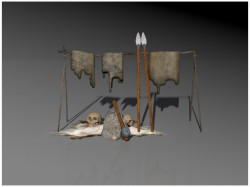 Over time, ancient human remains and objects made by men have been found in caves all around the world. These remains, which sometimes are fossils, usually represent men with an unusual physical constitution that is generally inferior to ours. Besides, they usually show signs of having suffered many diseases. Finding remains especially in caves is normal, because if they were on the surface, erosion and the presence of other human beings or animals would have erased any trace. However, even nowadays, when we observe the different human races, whose physical constitutions are different, we can find some tribes, isolated form civilization, whose anatomy is similar to these ancient men. In fact, there are still some tribes living in almost subhuman conditions (due to poverty, disease and isolation), that seem to differ very little from the life conditions of those whose remains are in caves.  Some of them are even live in caves too and they use objects and tools similar to the ancient ones.

Does the Bible say something about this? If God created man in his own image1, with great abilities and vitality, how come we find men like that? We are referring to both the ancient ones and those that still exist. Those men came to this because of their physical degeneration. Evidence shows that, on the contrary of what the evolution theory says, due to the wickedness of man and the sin consequences, human beings can degenerate a lot, and it is often man’s fault. That is exactly what the Bible says and it gives a clear example by explaining even the causes that led them to this situation. Today we have proof of their wretched life and many people interprets it the other way round. In the book of Job, Job himself clarifies this issue when telling about his own fall into disgrace and comparing his situation with the one of this kind of human beings, which already existed at the time. Let’s listen to him:

“But now they mock me, men younger than I, whose fathers I would have disdained to put with my sheep dogs. Of what use was the strength of their hands to me, since their vigour had gone from them? Haggard from want and hunger, they roamed the parched land in desolate wastelands at night. In the brush they gathered salt herbs, and their food was the root of the broom bush. They were banished from human society, shouted at as if they were thieves. They were forced to live in the dry stream beds, among the rocks and in holes in the ground. They brayed among the bushes and huddled in the undergrowth. A base and nameless brood, they were driven out of the land”.2

A possible explanation for the “caveman” is the curious, to say the least, fact that in the Mesopotamia area, where the garden of Eden is supposed to have been, there are no remains of any prehistoric civilization; which makes us think, as work hypothesis, that the expulsion from Eden after man’s sin left that area unpopulated for a long time. Man was expelled from Eden and had to adapt to the climatic circumstances that had changed because of his rebellion against God. Man then created improvised shelters in order to protect himself against animals that had also changed because of the same circumstances.3 Man was not created to defend or protect himself against anything, for nothing could hurt him. This is why man adapted to a hostile environment in a process of degradation or regressive evolution. When he gradually controls the situation and finds resources in order to survive with God’s help, as He has never forgotten his creatures4, man experiences a gradual progress at all levels. After the flood, there was not anymore a closed area for man, so he took the place he could have taken in Eden but in a very different way now: he builds homes, uses natural resources such as metal or fabrics, learns to communicate through writing, etc. This would explain that, in that area, the remains that can be found do not belong to prehistoric men, but to more advanced civilizations.