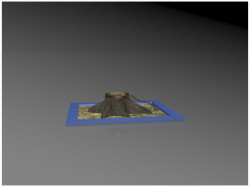 King Nebuchadnezzar was an absolute, proud and arrogant monarch, whose kingdom was the most important of his time and probably the richest of all times. The king of Babylon ordered to build magnificent constructions; some were true wonders of antiquity. Thanks to his relationship with the prophet Daniel, who was the main ruler over the entire province of Babylon, he had got to know and had accepted the true God of heaven.1 Nebuchadnezzar sometimes had attributed the glory and the splendour of his kingdom to God. But over time, he lost sight of the noble idea that was the purpose of God relating to the nations and put in danger his fulfilments as a wise governor, whom God would continue to use as an instrument to execute the divine purpose. In his mercy, God gave him a dream that contained a serious lesson for him to redirect his life.

In a vision2, Nebuchadnezzar saw an enormous tree that was growing in the middle of the land, and it had many beneficial qualities for all the living beings that were around it. But this tree was cut down; although it was left the stump and its ruts, also the bound with iron and bronze remain in the ground. In the dream it was added that they had to let his mind be changed from that of a man and let him be given the mind of an animal, till seven times pass by for him. None of the wise men in his kingdom could interpret the king’s dream. But Nebuchadnezzar called Daniel because the king knew that the spirit of God was in him and he would know the answer. And that is the way it was. Daniel told the king that the tree was the king himself, and that because of his arrogance and pride, he would be driven away from the people and would live with the wild animals; seven times would pass by for him until his acknowledge that the Most High is sovereign over the kingdoms of men and gives them to anyone he wishes and sets over them the lowliest of men. And he said the command to leave the stump of the tree with its roots means that his kingdom would be restored to him when he acknowledges that Heaven rules. A remarkable fact is that Nebuchadnezzar himself is who told his own testimony in Chapter 4 of Daniel.3

Twelve months later, as the king was walking in the royal palace of Babylon, he said: “Is not this the great Babylon I have built as the royal residence, by my mighty power and for the glory of my majesty?” Immediately what had been said about Nebuchadnezzar was fulfilled. He was driven away from people for seven years and ate grass like cattle. At the end of that time, he himself said that he raised his eyes toward heaven, and he added: “Then I praised the Most High; I honoured and glorified him who lives forever… At the same time my sanity was restored, my honour and splendour were returned to me for the glory of my kingdom. My advisers and nobles sought out me, and I was restored to my throne and became even greater before then. Now I, Nebuchadnezzar, praise and exalt and glorify the King of heaven, because everything he does is right and all his ways are just. And those who walk in pride he is able to humble”.4 The purpose of God that the greater kingdom of the world shows theirs praises was fulfilled. The public proclamation, in which Nebuchadnezzar acknowledged the mercy, kindness and the authority of God, was the last act of his life recorded in the holy book.