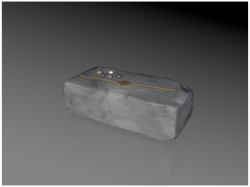 David, son of Jesse, wandered with his flock around lonely hills and wild hollows where there were beasts lying in wait. Lions often came out from the little forests that were besides the Jordan, or some bear came out from its burrow on the hills and, furious because of the hunger, attacked the flocks. According to the habits at that time, David carried his staff and sling as his only weapon; but it did not took him long to prove his strength and his courage when it came to protecting the animals he guarded.1 His experience tested David’s heart and developed his courage, strength and faith. When Israel declared war to the Philistines, three of his brothers joined the army.2 His father asked him to go see them at the camp to bring them food and see if they were all right.3 As he got closer, he heard a racket as if a battle was about to start.4 David ran and when he got there, he greeted his brothers. While he talked to them, Goliath, the champion of the Philistines, came out and, using offensive words, dared Israel to a duel, and defied them to select one of their men who could face him up in an individual battle instead of having the armies fight.5

That man was a strong, three-meter tall giant.6 He dared them every day, without anyone standing up to fight him.  The king Saul had said that the one to defeat Goliath would be exempted from taxes and he would give him great wealth and the hand of his daughter in Israel. David was moved when he saw everyone frightened and ridiculed the giant and his words.7 Saul asked David for permission to accept the challenge, but he had very little hope that David would succeed. They dressed the young man with the king’s armour, but he took it off and he only took his staff, his shepherd pouch, and a sling. He chose five plain stones in the stream and put them in his pouch and, sling in hand, got closer to the Philistine.   Goliath, the giant, stepped up. When he saw him, he was full of amazement and anger, and screamed and laughed at David.8 David did not get intimidated and challenged him, fully trusting God.9 Furious, Goliath ran towards his opponent. David put his hand in the pouch, took a stone and threw it with the sling, hurting Goliath on the forehead. The stone was stuck on his forehead and Goliath staggered and fell on the ground. David leapt on him and, using both hands, he took Goliath’s heavy sword and cut his head off.10 The Philistines panicked and, confused, headlong retreated, chased by the Israelites. David took the Philistine’s head and brought it to Jerusalem, but he kept his armour.11