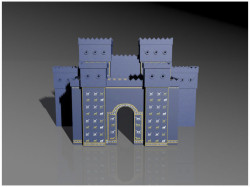 The prophet Jeremiah prophesied that Nebuchadnezzar, king of Babylon, would turn all the land of Judah and the neighboring nations into ruins and horror; and that those nations would serve the king of Babylon for seventy years. And when those seventy years would have arrived, God would punish the king of Babylon and that nation, for their evil, and to the land of Chaldeans; and would turn it in perpetual devastation.1 So it came true and Jeconiah, king of Judah, along with his family and the “crème de la crème” of the country were held captives to Babylon.  At the same time, the king of Babylon took all the treasures of the house of Jehovah, and the treasures of the royal house.2 It was permitted, however, that the kingdom of Judah, with its broke power and divest of its strength, of its men and treasures, survived as a separated government. At the head of this kingdom, Nebuchadnezzar put the youngest son of Josiah, called Mattaniah, but he changed his name to Zedekiah3, and the placed the prophet Jeremiah as proven adviser. At the advice of God, all Judah must submit to Babylon, even the captives, who must obtain the peace of the earth, to which they had been carried and from which they would come back when the predicted seventy years had arrived.4

While Jeremiah kept giving witness on the land of Judah, the prophet Ezekiel was aroused among the captives of Babylon to give warnings and consolation to the exiled, and to confirm the word of the Lord which spoke Jeremiah. He was told to predict, through a variety of symbols and solemn messages, the siege of Jerusalem and its complete destruction for not listen the advice of God.5 Zedekiah betrayed Nebuchadnezzar confidence, rebelling against him and joining forces with Egypt.6 That is why Nebuchadnezzar besieged again Jerusalem and this time he destroyed it completely; he took everything and everyone as captives.7 Jeremiah had been imprisoned by Zedekiah, but Nebuchadnezzar protected him and the prophet chose staying with the few inhabitants of Judah, the poorest who left there.8 The sorrow of the prophet by the utterly depravity of Judah was big, and his constant prayer was: “Let us search and try our ways, and turn again to Jehovah”.9

Among the sons of Israel deported to Babylon at the beginning of the seventy years of captivity, there were men who were as faithful to the good principles as steel, who would not be corrupted by egoism, but who would honor God even when they lose everything. There, these men will have to execute the aim of God giving the blessings from Jehovah knowledge to the pagan nations. They had to be their representatives. They must not under any circumstances give in on idolatrous, but consider as a great honor the faith they held and the name of worshippers of the living God. And so they did They honored God in prosperity and adversity; and God honored them. Among those who kept their fidelity to God were Daniel and his three companions10, illustrious examples of what men who joined the God of knowledge and power could become.