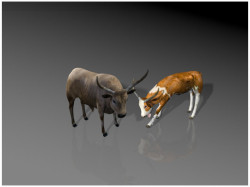 For his fidelity and integrity, Joseph, son of Jacob, was locked in jail even though he was innocent. His character was tested1, but it glowed, even in the darkness of the cell. His faith and patience remained strong. The chief baker and the chief cupbearer of the king had also been locked in jail. Both of them had an extraordinary dream and so they told to Joseph, who, inspired by God, could interpret it. Three days after, what was interpreted came true, and the chief cupbearer was reinstated in his post, but the chief baker was killed by order of the Pharaoh. The cupbearer of the king had expressed his deepest gratitude to Joseph, who told him about his own unfair imprisonment. Joseph begged him for presenting his case to the king in compensation for those years in jail.2 The cupbearer saw his dream fulfilled in everything; but when he was reinstated to the royal favor, he didn’t remember his beneficent. Joseph remained in prison for two additional years.

The king of Egypt had two dreams which seemed to herald a great calamity. These dreams worried him and nobody could interpret those.3 The perplexity and anguish of the King increased, and the terror spread throughout his palace. The cupbearer remembered Joseph thanks to the general agitation, and he felt remorse for his oblivion and ingratitude. He informed immediately the king of how his own dream and the one from the chief baker had been interpreted by the Hebrew prisoner, and how his predictions had come true. He took Joseph to the Pharaoh, who rejected modestly the honor of possessing a superior wisdom, affirming that “God alone can explain these mysteries”.4 The Pharaoh related him his dreams. He had seen seven fat cows coming up out of the river which had been devoured by other seven lean cows coming up out it later. The same happened with seven good ears, devoured by other seven thin ears. Joseph said that God had showed the Pharaoh what he was going to do. There will be seven years of abundance. The fields and gardens will produce the most abundant crops ever. And this period will be followed by seven years of severe hunger. He advised the Pharaoh to make a prudent and wise man leader of Egypt’s land, and to gather the provision of those seven abundant years in warehouses to the land, for the seven years of hunger that there will be in Egypt’s land.5

The king was perplexed, but when he saw and heard the wisdom and caution of Joseph in prison administration, it was obvious for him that Joseph had a great administrative ability. The appointment was decided and it was surprisingly announced to Joseph: “Since God has made all this known to you, there is no one so discerning and wise as you. You shall be in charge of my palace, and all my people are to submit to your orders. Only with respect to the throne will I be greater than you”.6 The king proceeded to sworn Joseph with the emblems of his new and high position. The Pharaoh took off his ring, put it on Joseph and gave him robes made out of the best linen. He put him on a gold necklace on his neck and made him get on his second cart. “He made him lord of his house, and ruler of all his substance”.7