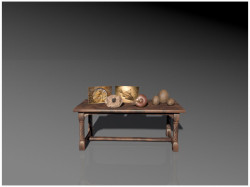 The flood waters came from above, from the heavens, as well as from the depths of earth. Something broke on the surface of earth and in the bottom of the sea1, allowing an immense quantity of water to come out, which joined the water that, as “floodgates”, fell from the heavens. There was so much water that it covered the mountains to a depth of more than seven meters.2 The waters covered the earth, which was left as in the first day of the creation.3 The push and fury of such colossal storm increased exponentially as days went by and it is easy to understand that the whole surface of earth was modified, an earth where it had never rained.4 The cataclysm caused earthquakes, fractures, and huge slopes that probably did not exist before. Many canyons that can be seen now were created by the enormously strong currents that drilled the mud settled in layers. Immense forests and many groups of animals got buried underground. Many naked rocks and mountains, as if they were the skeleton of earth, were left uncovered5, spoiling the beauty and harmony of God’s creation.

When in the end, after almost one year, the waters descended because of the great wind sent by God6, the soil erosion could be seen and there was mud everywhere. This mud, almost all of a sudden, had buried thousands and thousands of corpses that matched all kinds of living beings.7 This is why all kinds of fossils and other remains can be found all over the world to prove the fact of this catastrophe of planetary dimensions. There was nothing left, everything was “destroyed from the earth”.8 God stopped the fountains of the deep9, made everything settle, and left the earth drying up for several months.10 The fossils created on that occasion have been found for many years now, and give evidence of the result of man’s disobedience and wickedness. Sadly, many people do not believe the clear description that the Bible, God’s word, gives of what really happened11 and its explanation about all those fossil remains, oil, and coal that can be found all over the world. The cracked earth’s surface was then divided in great, unstable plates with remarkable rifts between them.