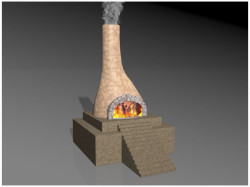 The Babylonian empire was known by their conquering power, their contribution to different areas of knowledge and by the advances on the construction and use of ceramics, knowledge inherited from the ancient Assyrian and improved by Babylonians. The furnaces of fire were very used in Babylonia. They were used to build the walls that protected the city, for which the land extracted from a moat around the city was used. This moat was also used as protection to the attacks of the enemies. It was with that land with which the bricks fired on the furnaces of fire were made. Then, using hot asphalt as mortar, they first put up the walls of the canal which strengthened the bank of the canal and afterwards they constructed the big wall. For all this big work, the furnaces of fire were essential, since not only the bricks were fired there. They also fired the metals with which the weapons were made, tools for building, for agriculture, and the precious metals to make statues, which were erected by kings as symbol of their dominance and power. But the furnaces were also used as instrument of torture and death for those who were disloyal to the king.

The Bible registers in the Book of Daniel the name of four young people who were part of the group of deported people from Judah, after the Babylonian invasion in 507 B. C: Daniel, Ananias, Mishael and Azariah. Their names were changed by Belteshazzar, Shadrach, Meshach and Abednego respectively.1 King Nebuchadnezzar, motivated by a dream he had, told in the second chapter of the Book of Daniel where he is identified as the head of gold of a big statue2, going against the revelation of the dream, decided to erect another statue, all made of gold, in his image, so that all the kingdom worshipped in his name.3 The king issued an edict through which he forced all his subjects to kneel at the image, when the musical instruments sounded. And those who shall not kneel would be thrown to a fire furnace.4

The same furnaces which fired the bricks were now instruments of death. When the music sounded, Shadrach, Meshach and Abednego did not kneel at the statue5 and they were brought to the king. He got angry with them and gave them a second chance. The young people decided to remain faithful to their God and did not want to obey the king, so they were thrown to the fire furnace, which was so heat that the executioners, when they approached to throw them inside, died instantly.6 The king was witness of the protection that God gave to the young people, those who the king himself saw walking inside of the furnace burning, in the company of another man, who he identified as similar to the son of the gods. The king called the young people to go out of the furnace, and when he saw them intact, he ordered to all Babylonia to worship the God of these Hebrew young men.7