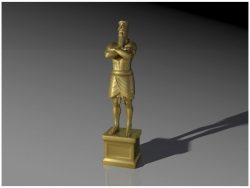 “Nebuchadnezzar the king made an image of gold, whose height was threescore cubits, and the breadth thereof six cubits: he set it up in the plain of Dura, in the province of Babylon”.1 It is difficult to think about the exorbitant proportions of a statue made of gold of about 30 meters high which represented him. How vain and proud the king was! In addition, he was so egomaniacal that he ordered that de day of the dedication, at an agreed signal, everybody must kneel down the statue and adore it, under the penalty of death in a fire furnace.2 If Babylonian leaders, the richest of all the earthly kingdoms, had always cultured the fear of God, they would have been given wisdom and a power that would have united them and kept them strong. They asked men like Daniel, who knew they honor the living God and were honored by him, to reveal the mysteries of the Providence.

Some time ago, God had revealed to Nebuchadnezzar a dream of a big image made up of different metals.3 It was a symbol that presented to Nebuchadnezzar events which reached the end of the world. It had been given to him so that he could understand the part he had to carry out in the history of the world, and the connection his world must hold with the kingdom of heaven. In the interpretation of the dream, he had been told to be the head of gold.4 The king had recognized the power of God when he said to Daniel: “Surely your God is the God of gods and the Lord of kings,…and a revealer of mysteries”.5 After that, Nebuchadnezzar felt for a time the influence of the fear of God; but his heart wasn’t cleaned of worldly ambition or of the desire of extolling himself. The prosperity of his reign filled him with pride. As time passed, he stopped honoring God and worshiped his idols more zealously and with more fanaticism than before. He made a similar image, but all of it was made of gold, so that it meant that Babylonia was an eternal, indestructible and omnipotent kingdom which would destroy and devastate the rest of the kingdoms, and which would remain forever.

He forgot about the notable providences related to the dream of the big image, and he also forgot that Israel’s God had clarified the meaning of the image through his servant Daniel.6 The symbolic representation, through which God had revealed to the king and his people his aim for the nations of the earth, was going to be used to glorify human power. The interpretation of Daniel was going to be rejected and forgotten; the truth was going to be bad interpreted, falsely and bad-carried out. Nebuchadnezzar ordered to build a big gold image using his big treasures. It is not surprising that in a land where adoration of idols was universal, the splendid and invaluable image erected in Dura’s plain to represent the glory, magnificence and power of Babylonia, was consecrate as object of worship. And so it was stipulated, and it was decreed that in the day of the dedication everybody may state his loyalty to Babylonian power by knelt at the image.