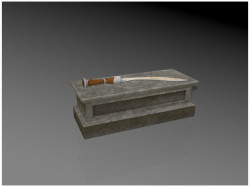 When David defeated the gigantic Goliath in the Ellah valley, he managed to do it only with his sling and one of the five stones he carried with him. When Goliath fell, David took his huge, heavy sword and cut his head off. David kept Goliath’s weapons in his tent1, the big sword among them, his precious trophy. For a long time, in the beginning of Saul’s kingdom, Hebrew people barely had weapons, only slings and bows. They were oppressed by the Philistines who did not allow smiths in Israel, so they did not have any swords or spears, except for Saul and his son Jonathan. They even had to go to the Philistine forts in order to sharpen the ploughshares, axes, and sickles.2 It was usual at that time to bring the armour of kings or paladins who had perished during battle to the sanctuaries built for each nation’s gods. When Saul died in battle against the Philistines, his enemies cut his head off and took his armour to the temple of Astarte or Dagon.3 As time went by, maybe due to this habit, Goliath’s sword was kept in God’s tabernacle.

When David ran from Saul’s pursuit, he arrived to Nob, a city where the tabernacle had been taken from Shiloh. Ahimelech, the high priest, officiated there. David thought about taking refuge at the house of that servant of the Lord. Due to his anguish, he resorted to tricking. He then said to the priest that the king had sent him on a secret mission that needed to be carried out as quickly as possible. This way David showed lack of faith in God, and his sin caused the death of the high priest shortly afterwards.4 Doeg, who was Saul’s head shepherd and had accepted the faith of the Hebrews, was then paying his vows in the worship place . When he saw him, David decided to look quickly for another shelter, and to get a weapon to defend himself if necessary. He asked Ahimelech for a sword, and he said that he only had the sword of Goliath, kept as a relic in the tabernacle. David said: “No sword is as good as that one! Give it to me!”5 David’s courage came to life again when he took the sword that he had once used in order to kill the champion of the Philistines.

David ran away to where Achish, Gath’s king, was, as it seemed to him that he will be safer among the enemies of his people than in king Saul’s dominions. However, Achish was told that David had been the man who had killed the Philistine champion of Gath years before; and now he who looked for shelter among the enemies of Israel was in great trouble. By pretending that he was crazy, he managed to trick his enemies and to escape.6 David made his first mistake when he did not trust God in Nob and the second one when he deceived Achish. David had already showed noble traits of character, and his moral courage had gained the people’s support; but when he was tested, his faith hesitated, and his human weaknesses appeared.  He believed in God and went to fight on his behalf. Nevertheless while they looked for him and chased him, perplexity and affliction had almost hidden his celestial Father from his sight.