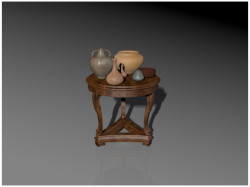 God used a mud vessel broken in pieces to symbolize the punishment of his rebel people, through the prophet Jeremiah.1 Mud vessels were used, among other things, to keep or hide inside them important documents. They were generally well sealed and kept in a safe place.2 The Lord, too, used the mud and the mud vessels as symbols to represent Creation in general3 and particularly human being creation4, as well as his proceedings to “model” human’s character5 or to intervene in history.6 But mud vessels were commonly used to keep water or food products as flour, oil and others.7 Precisely, regarding to this general use, the Bible mentions some astonishing facts, some miracles very similar to one another, made by God through two prophets, one of them disciple and successor of the other. They are Elijah and Elisha.

On one occasion, God sent Elijah to Sarepta of Sidon, in Phoenicia, to visit a widow.8 Elijah must ask her to give him water and bread. This woman, even though she was a very poor widow with a son to take care of, gave to the prophet with great hospitality the only thing she had left, a handful of flour in a large earthenware jar and a bit of oil in a vessel, with which she cooked a tart, which she was going to cook precisely for themselves. They thought about eating it and then die of starvation, for they had nothing else. But even so, she attended first the visitor. As a reward for her goodness the prophet told her that she will never lack of flour and oil in those mud containers while they needed it. In her severe need, this woman revealed her faith carrying out the request of the outsider who requested to share with her his last bite. The hospitality shown to the prophet of God by this Phoenician woman was admirable, and her faith and generosity were also admirably rewarded.

To the prophet Elisha, another widow, this time from the Jewish people9, begged him for help, for, as well as being without a husband, she was full of doubts and that is why her sons were going to be taken as servants, leaving her totally defenseless. She just had in house a vessel with oil. Elisha told her to go and borrow all the vessels you can get from your neighbors. So she did and she fill her house with empty vessels. The prophet told her that with the oil of the vessel, she had to go filling and keeping the borrowed vessels. Miraculously, the oil did not stop flowing of the vessel of the widow until she filled the rest. She could sell the oil, pay her debts and have enough to live with her sons. To all of those who, in test time or shortage time, are nice and help others needier, God had promised a blessing. He has not changed. His power is not less today than in the times of Elijah and Elisha.10 It is not less safe than when this promise was pronounced by our Savior: “Whoever receives a prophet in the name of a prophet will receive a prophet’s reward”.11 The apostle Paul said: “Do not neglect hospitality, because through it some have entertained angels without knowing it”.12 These words have not lost strength with the passage of time.