PLAGUES AND GODS OF EGYPT 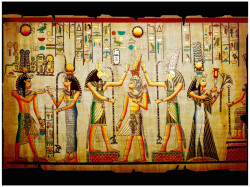 The biblical story about the plagues of Egypt1 was actually a confrontation between the God of Israel and the gods of Egypt. God sent Moses and Aaron to Egypt as his representatives to ask the Pharaoh, king of Egypt, to free the Hebrew. The Pharaoh himself and his home were considered as gods of Egypt and when, despite all the warnings sent by God through Moses and Aaron, the stubborn Pharaoh opposed, God sent ten plagues2, one after another, interspersed with constant warnings and opportunities to rectify. Each plague affected animals, objects or places that were allegedly holy and protected by their gods. When it comes to the Egypt story, we can also perceive a confrontation between the God of Israel and Satan. Satan had always wanted to be God, according to the biblical story of Isaiah 14: 13; so he operated through the Pharaoh, his sorcerers, wizards, and wise men to oppose the God of Israel, who is the one true God that created the universe, the earth, the stars, the sun, the moon and humankind.

Until the moment where the second plague came, the wise sorcerers who served the Pharaoh seemed to be able to do the same as Moses and Aaron3, who had God’s power, but there was a limit they could not exceed and even they were affected by the ulcer plague. It was then obvious that the gods of Egypt were a fake and did not have any power over anything, and that the true and genuine God of Israel had power over everything. In the end came the last plague: the death of every first-born in Egypt4, from the son of Pharaoh to the last servant, the proud Pharaoh, humiliated and terrified, she relented, though reluctantly, and let the people of God Egipto.5