PRECIOUS GEMSTONES ON THE BREASTPLATE 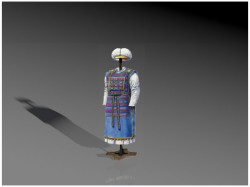 In order to serve at the Sanctuary, God chose the tribe of Levi,1 as the remained loyal to God, in contrast to the generalized idolatry shown by the people at Sinai.2 Each descendant of the sons of Levi was in charge and had to take care of a different part of the Tabernacle, and they also were in charge of transporting, assembling and dismantling it.3 Aaron, his sons and his descendants were appointed as priests. For their ministry, the priests had to wear a linen piece of clothing,4 but the high priest, Aaron and his descendants also had a special type of clothing, splendid and full of symbolism, just as their particular ministry… Their holy clothing included: a Breastplate, a ephod, a robe, a woven tunic, a turban, and a sash.5 It was all described in detail by God himself to Moses, who explained it to the experts that were appointed to make them.6 The Breastplate was the most symbolic element. Besides its special square design, it had twelve precious and semi-precious gemstones set in four rows that represented the people, as each one of them had the name of one of the twelve tribes engraved on it.7

Besides these rows and into the Breastplate, there were the mysterious stones of Urim and Thummim, used by the high priest to consult God’s will.8 When the Lord was asked about some subject, the light illuminating the right stone meant approval, but if a cloud darkened the left stone, God disapproved. The Breastplate and all its symbolism were on the priest’s heart. In a similar way, he wore a flower ornament of pure gold over his forehead, on the turban, with the phrase “Holy to the Lord” engraved on it. It is a symbolic way of showing that only God is saint and that only his justice can give us grace before him.9 Everything that is related to the behavior of priests and their clothing had to make the onlooker feel God’s sanctity, how holy is his worship and how pure had to be those who came close to his presence. Not only the Sanctuary itself, but also the ministry of the priests, had to be “a copy and shadow of the heavenly meeting tent”.10 That is why it was extremely important; and the Lord, through Moses, gave the clearest and most precise instructions about every issue of this symbolic worship.